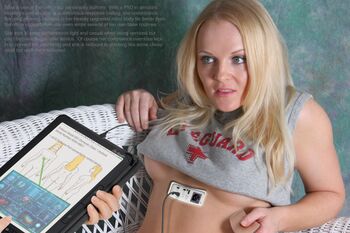 A fembot is reprogrammed as part of her repairs. By BA.

In fembot fetishism, programming is the act of creating or altering the collections of instructions on which a fembot operates. These collections are referred to as programs, and collectively as programming. Altering a pre-existing program is called reprogramming. The purpose of these operations is to alter the fembot's functions and behaviors, either by updating them, upgrading them or erasing them.

A fembot may object to being reprogrammed. Her programmed personality may find the proposed changes useless, insulting or too different from their current programming and thus alienating. Alternatively, the act of reprogramming may be done only by select persons and software programs, with the fembot objecting on the basis of authorizations. Finally, a sleeper fembot may find the very idea of being programmable alien or insulting.

Programming may be done through a device being plugged into the fembot's access panel, or wirelessly.

Lilly plugged a data cable into my main input and typed away on the keyboard. As I sat up straight, she fed all sorts of things into my main data banks. I could see cheerleading moves, hundreds of them, pass through my sight as I "learned" them all. After the basic moves were imported, Lilly gave me all of the routines that were specifically choreographed so that every cheerleader would match up perfectly with one another. The last piece of data I received was titled "fem_erotic.exe". Once executed, it supplied my computerized libido with a huge boost toward female robots. Suddenly, I thought about being a female android and it made me horny. I could feel myself getting excited as I was a machine made to look like a beautiful woman who was hooked up to a computer.