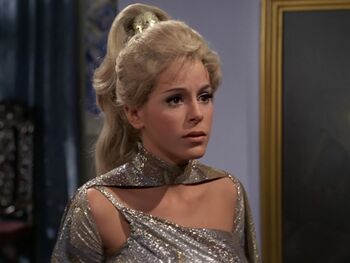 Rayna doesn't know she is an android

In fembot fetishism, a sleeper is a fembot oblivious to her own nature, often believing herself to be genuinely human.

Unlike a fembot simply presenting herself as human, a sleeper internally believes herself to be human, and will often react negatively towards the idea of actually being a robot. This self-deception may be achieved through false memories, a fabricated environment and a denial of experienced reality. The purpose of a sleeper may be better integration in human society, whether for espionage purposes or human interaction, testing purposes, or to alleviate the transformation of a person from a human to a robotic body.

A sleeper becoming aware of her actual nature is often presented as a traumatic event, resulting in the fembot breaking down emotionally or terminally malfunctioning. Another approach to such a reveal is that of self-discovery, the sleeper coming to appreciate and even take advantage of her mechanical nature.

The term "sleeper" originates from the espionage idea of sleeper agents. While real-life sleeper agents simply maintain a deep and prolonged cover, their depiction in fiction often involves brainwashing, self-deception and false memories, traits the fembot-related term of "sleeper" draws upon.

"The man seemed mildly surprised to hear her speak. He walked over to her. Kelly could feel his hand on her ass. It felt nice. She was glad he was nice enough to feel her up like this. It was very polite of him, especially to stick his fingers up her ass like he was doing right now and feel around like he was searching for someth