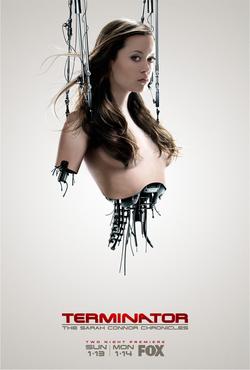 A Terminator is a mostly robotic cyborg from the fictional universe of Terminator films, comics and novels. These machines are usually robots covered with living skin and tissue, though other variants exist.

Model T-X from the movie Terminator 3

The T-X was a female Terminator from the third film installment of the franchise. It was completely synthetic and capable of changing its shape.

The other female Terminator known from this fictional universe is Cameron.

Terminator comic books from the late 1990s featured one or two female terminators in minor roles.