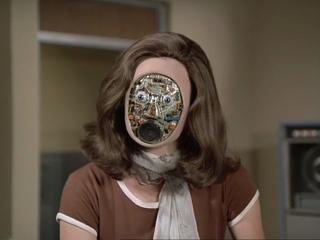 A fembot from the 1976 The Bionic Woman TV show, which originated the term, with its face off.

A fembot is a robot built to resemble a human woman.

"Fembot" is a portmanteau of the words "female" and "robot", first appearing in the three-parts 1976 crossover episodes "Kill Oscar" of the The Bionic Woman and The Six Million Dollar Man TV shows. The word "fembot" was later parodied in the Austin Powers film series, starting with Austin Powers: International Man of Mystery in 1997.

The words "android" and "gynoid" come from the Greek language, and respectively mean "having the form or likeness of man" (as in male) and "having the form or likeness of woman". Both terms have come to be used for humanoid robots with a high degree of resemblance to human beings. The male "android" has been widely accepted as gender-neutral, and applicable to both male and female-presenting robots.

Depending on the use and design of a specific fembot, specific terms may be used: a fembot built with sexual purposes may be called a sexbot, while one built for killing may be called an assassindroid. 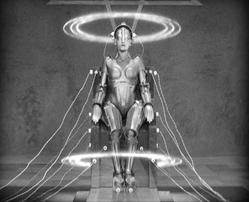 One of the earliest known appearances of a female robot is the 1886 novel L'Ève future (The Future Eve) by French author Auguste Villiers de l'Isle-Adam. In it, a fictionalized Thomas Edison builds Hadaly, an automaton, to replace the protagonist's, Lord Ewald, unfulfilling fiancée. Before Lord Ewald can return home with his new lover, the ship he his traveling on sinks, and the android is destroyed.

Fritz Lang's 1927 movie Metropolis features the first ever female robot to appear on film. The robot, Maria, appears first as a metallic-looking robot, then receives artificial skin to become the android duplicate of a human woman.

The Actroid series of robot may be considered to be the first real fembot in existence. While female-presenting animatronics and other automatons have existed for decades, the Actroid series are some of the first robots to be interactive, with some models are capable of having simple conversations with humans, such as asking basic questions and giving directions.

In 2009, the HRP-4C was introduced at the CEATEC JAPAN 2009 Festival. Unlike the Actroid series, which are designed to be static, HRP-4C was shown to be able to move around on its two feet, along responding to human speech and displaying facial expressions.

In 2018, Abyss Creations, manufacturers of the Realdoll series of sex dolls, introduced their Realbotix project, which combines the Harmony artificial intelligence software with a robotic head. This enables Harmony to speak, emote and respond to sexual activity, making it one of the first sexual robots commercially available.