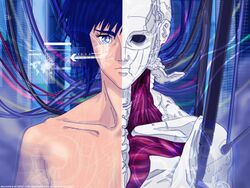 Major Motoko Kusanagi from Ghost in the Shell is mostly robotic, with only a small part of her original brain remaining organic

A Cyborg is an organic being, such as a human, which has undergone mechanical augmentation as a form of enhancement or as a prosthesis after suffering a debilitating injury. The term "cyborg" is an abbreviation for "cybernetic organism".

Depictions of cyborgs in media are varied. A common reason for such augmentation is to repair debilitating injuries, up to and including the wholesale replacement of the body save for the brain or parts of the brain, though more commonly, extremities such as the arms and legs are replaced. Other forms of cybernetic parts include cybernetic eyes and cybernetic organs. Implants, such as those that allow a human to connect to computer systems, are also frequently depicted. Cybernetic parts can have a wide range of functions and are ultimately limited by a writer or effect's designer's imagination or budget.

Because of their similarity to androids and robots to the casual observer, the term "cyborg" is sometimes inaccurately used to describe a wholly mechanical being such as an android, or a bio-mechanical robot such as a Terminator. This is especially common in older works, before such terms became widely circulated among mainstream audiences. Additionally, descriptors such as "half-human, half-cyborg" occasionally appear, which are ultimately redundant. Strictly speaking, a cyborg is an organic being that is enhanced or supplemented through technological augmentations, implants and prosthesis.