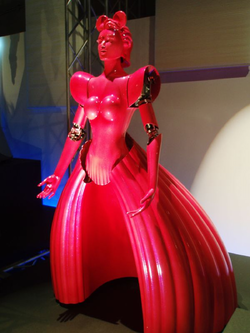 The Partner Ballroom Dance Robot (PBDR) by Tohoku University's Department of Bioengineering and Robotics are designed to anticipate and accompany their dance partners' movements.

A robot is a machine capable of processing data or physical perceptions electronically, and carrying out a complex series of actions automatically and at least partly autonomously.

The word "robot" originates in Czech writer Karel Čapek's 1920 play R.U.R., Rossumovi Univerzální Roboti (Rossum's Universal Robots). While the robots featured in the play are artificial biological organisms, their mass-production in Fordist assembly lines and their use for unpleasant, repetitive labor has seen the term applied to mechanical automatons. The term "robot", attributed by Karel Čapek to his brother Josef, comes from the Czech word robota, meaning "forced labor" or "serf labor".

Most robots' appearances and shapes depend on their use. Industrial robots used in assembly lines, for example, are articulated arms with tools specific to their functions at their end. Humanoid robots are a subset of robots built to resemble the human body to various degrees. The words "android" and "gynoid" come from the Greek language, and respectively mean "having the form or likeness of man" (as in male) and "having the form or likeness of woman", and have been used to describe robots with high degrees of resemblance to human beings. The male "android" has been widely accepted as gender-neutral, and applicable to both male and female-presenting robots.

"Fembot" is a portmanteau of the words "female" and "robot", first appearing in the three-parts 1976 crossover episodes "Kill Oscar" of the The Bionic Woman and The Six Million Dollar Man TV shows. The word describes a built to resemble a human woman. "Droid", a truncated form of "android", may be seen used in pop culture. Originating from the 1977 science-fiction film Star Wars, the expression was trademarked the same year by Lucasfilm Ltd. LLC, and as such may not be used without the company's permission.

While animatronics are machines seemingly similar to robots, and even sometimes androids and gynoids, they are distinct in that they are intended to reproduce preset moves and prerecorded sounds, without reacting to their environment.