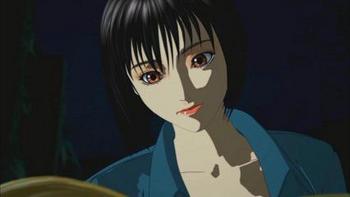 Hitomi from the anime Appleseed

A Biodroid - sometimes referred to, dependent on source material, as a Bioroid; both words are portmanteaus of the term "biological android" - is an artificially-created being that is wholly constructed of living tissue. Fundamentally, unless there are mechanisms put into place which could detect the physical differences between a naturally-born person and a biodroid/bioroid - for example, the level of cellular wear-and-tear the passage of time inflicts on the human body - it could be possible for such a being to completely pass off as a natural-born human, even to invasive medical scans.

By this definition of the term, a clone can be seen as a type of biodroid/bioroid, though restricted in one way because of the DNA source to become a mere replica of the physical template.

A replicant as what appeared in the 1982 movie Blade Runner could also, by the above definition, be a type of biodroid/bioroid.

The primary difference between a natural-born person and a biodroid/bioroid would be mental in this case. As shown by the example of the denizens of the city-state of Olympus in Masamune Shirow's 1985-89 manga series Appleseed, certain measures can be taken to ensure that a biodroid/bioroid cannot express the full gamut of human emotions such as anger, hate and the desire to do evil. Furthermore, physical modifications could be done - either post-production or (if the base technology will allow it) during production - to prevent a biodroid/bioroid from carrying out normal natural functions such as parenting children. Finally, biodroids/bioroids could be given physical or mental enhancements which would permit such a being to carry out tasks no normal human could perform. This is aptly demonstrated by the character of Roy Batty from Blade Runner; he was a combat model replicant designed specifically for off-world usage.

In Rei's case, she is a being that was formed by cloning DNA from the late wife of the leader of NERV (Yui Ikari) with DNA samples taken from the Angel Lilith to create a unique being.