From FembotWiki
(Redirected from The Bionic Woman) 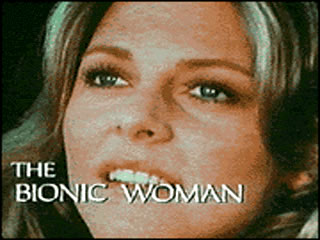 Still from the opening credits

The Bionic Woman is an American television series, aired from 1976 to 1978 on ABC for its first two seasons and NBC networks for its final season. The show followed the adventures of Jaime Sommers, a cyborg woman who has been "rebuilt" with electronic and mechanical parts after a parachuting accident. The show was a spin-off from the TV series The Six Million Dollar Man, itself about the adventures of a cyborg rebuilt after an accident.

Of note are the second season's three-parter episode "Kill Oscar", which coined the term "fembot", and the third season two-parter episode "Fembots in Las Vegas", which sees the fembots return.

Dr. Franklin's assistant Katy is revealed to be a fembot

In the first episode, Dr. Franklin, a former Office of Scientific Intelligence (OSI) scientist, is working on a project to create female androids, which he names "fembots". His sponsor visits to see how their investment is faring. As Katy, Franklin's assistant, explains their project of replacing critical OSI members with fembots to steal the U.S. government's new weather control device for the Russian government. As the sponsor is extremely disappointed with what he considers a far-fetched plan, Franklin pulls off Katy's face, revealing to a distraught sponsor that his fembots are nigh-indistinguishable from human beings, and is allowed to continue. Oscar Goldman, Jaime Sommers' superior in the OSI, is kidnapped and held for ransom by the fembots. As Jaime battles Callahan, a robotic duplicate of one of her OSI friends, and Katy, Dr. Franklin's prototype fembot, she discovers that their power surpasses hers and she is rendered unconscious before Steve Austin, protagonist of The Six Million Dollar Man arrives to assist.

In the second episode, Steve Austin battles the fembots and frees Goldman, unaware he actually rescued a robotic duplicate. It is discovered that fembots provoke a buzzing in Jaime's bionic ears, allowing the fembots to be identified. Eventually, Goldman and other infiltrators are figuratively and literally unmasked. However, Dr. Franklin, speaking through Lynda, a robotic duplicate of an OSI clerk, announces he has managed to steal the weather control device.

In the third episode, the effects of the extreme weather conditions created by the weather control device are worldwide, and government officials get together to form a plan to destroy Franklin's island (where Oscar is being held captive). Hearing this, Jaime and Steve attempt to rescue him. Fighting fembots and the extreme weather conditions, they arrive at the base. With fembots being steadily put out of action, a furious Franklin localizes the hurricane effect with plans to destroy everyone. With the base collapsing around them, Jaime and Steve get Oscar and Franklin away as the device destroys itself.

"Fembots in Las Vegas" is a two-parts episode of the third season of the The Bionic Woman TV series.

In the first episode, Dr. Franklin's son Carl has reactivated the fembots, and is planning for revenge against the OSI. His plan is to get control of a satellite energy ray weapon, by replacing its engineer Rod Kyler's girlfriend Tami with a fembot. Once again, Jaime finds herself up against the female robots as attempts are made by OSI to get to Franklin's base. Jaime battles the fembots as they try to find a way into Franklin's complex.

In the second episode, Carl Franklin has managed to launch the stolen energy ray into space and now demands that Oscar Goldman, Dr. Rudy Wells and Jaime Sommers, whom he considers responsible for his father's death, be handed to him. However, Dr. Wells has devised a plan to direct the weapon at the complex while Jaime fights off the fembots. The countdown has started as the fembots have been disabled, but their escape is prevented by Carl, who reveals himself to be a robot. Jaime fights him, and he ultimately meets his destruction; meanwhile, Oscar and Rudy wait in safe shelter for Jaime to make it out, as the base begins to explode.