Fembots In Las Vegas: An In depth look. 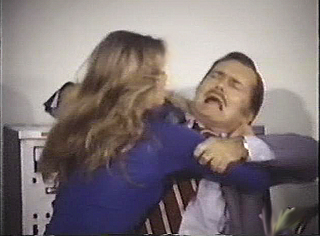 There's two ways fans that are first time viewers of season 3 can go into watching this. One way is to view it on it's own merits. It has some good moments and the usual good character interactions but with some slightly annoying plot holes. However, if one were never to have seen the Kill Oscar trilogy, they could most likely rate this episode a winner.

I however, went into viewing this episode viewing it as the sequel to one of my all time favorite episodes. Sometime sequels turns out to be superior than it's predecessor or sometimes a sequel can be not as good but still enjoyable to watch

Fembots In Las Vegas fails for me on all levels. As a sequel, not only does it not gel well story wise with it's predecessor when viewing it back to back with Kill Oscar, it's an over all disappointing inferior sequel.

The story is set one year later after the events of Kill Oscar. Doctor Franklin recently dies in the federal pen and then a new line of fembots (and one leftover duplicate of Callahan from the previous crisis) emerging under the control of Carl Franklin, the vengeful son of the deranged and recently deceased Dr. Franklin, in a scheme to steal America's first directed energy ray weapon. 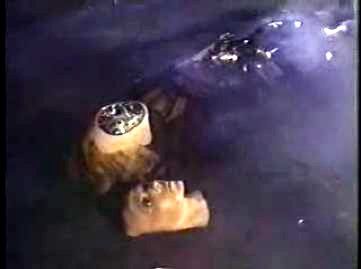 It's a big surprise to me that this sequel was written by Arthur Rowe, the same writer who wrote the excellent Kill Oscar trilogy and it's just as baffling that this so called professional writer doesn't seem to know what was previously established in it's predecessor.therefore contradicting his own previous work by establishing new information that doesn't gel with things the viewers learned from the previous Kill Oscar trilogy.

One of the most unforgivable aspects of Fembots In Las Vegas was not just the fact that Steve Austin was not included in this story of this world-threatening event but this story completely erases Steve's involvement in the previous Kill Oscar trilogy. In fact at this point of the series is when the Steve Austin character no longer existed. Carl Franklin in part 1 mentions that the three people responsible for the destruction of his father was Jaime, Oscar and Rudy with no mention of Steve Austin. Later on in part 2 after stealing the directed energy ray weapon, Carl's first list of demands were personal in reference to the immediate surrender of Jaime, Oscar and Rudy but no mention of Steve. If anything Steve Austin was a bigger thorn in the senior Doctor Franklin;s side than Rudy ever was and one would think that this vengeful son would demand the immediate surrender of Steve more so than Rudy.

Season 2's, Doomsday is Tomorrow which also had a world-threatening event, simply explained away Steve's absence through dialogue stating that he was aboard NASA's Skylab space station at the time leaving the fate of the world in Jamie's hands. An explanation of Steve's absence wasn't needed that badly in DDIT (at least when comparing it to the events in FILV which is suppose to be a story of personal vengence) but never the less, it was icing on the cake which was desperately needed in Fembots in Las Vegas. 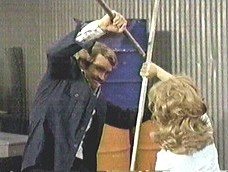 A scene from the predecessor, "Kill Oscar" of Col. Steve Austin fighting the Callahan fembot while infiltrating Franklin's base.

The fact that The Six Million Dollar Man's 5th season's Dark side of the Moon parts 1 and 2 (where Steve Austin spent a week or so up on the moon) first aired about the same time as Fembots in Las Vegas did was a perfect opportunity to explain away Steve's absence through dialogue. Unfortunately the writers never took advantage of it.

Another blunder, was the Callahan fembot being put into storage in the OSI vault after the events in "Kill Oscar". I'm putting aside the fact that we've all seen the Callahan fembot struck down by lightning on Saint Emil Island and then washed away to sea when the damn busted. I'm also putting aside the fact that the remains of Callahan, along with Katy and fembot # 5 should be somewhere at the bottom of the Alantic Ocean corroding away from the salt water, However, I must ask who was the idiot that left the power module/light bulb intact on this miraculously recovered and restored Callahan fembot before putting it into storage? Was it Rudy?. 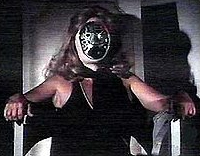 The miraculously restored Callahan fembot that was clearly seen destroyed on it's predecessor, "Kill Oscar"

It should be noted that in the original script dated June 7th, 1977, the fembot that was stored in the vault and then escapes was the fembot duplicate of Lynda Wilson, Rudy's assistant keeping with the established continuity of the previous Kill Oscar Trilogy. So in essence, Arthur Rowe did attempt to keep the continuity flowing. It's just unknown how and why the Lynda character and her fembot duplicate got rewritten and replaced by Callahan. Enquiring minds want to know.

Another downer, was that the fembots seem to have lost some of their creep factor. They just weren't as scary this time around. They barely lost their face and when they do they just didn't look as menacing probably because of budget cuts.

The internal facial mechanism and circuitry that gave the fembots that inhuman image of menace.is alot less detailed this time around. It's just eye balls and a sub wolfer mouth piece with little to no additional circuitry.

Perhaps the biggest contradiction to the previous established cannon was when Carl Franklin revealed his secret identity. Yes, it was a cool twist but yet again it opens up another can of worms that contradicts everything we've learned from the Kill Oscar trilogy.

Not to say this episode was complete pile of rubbish because there were some good things in Fembots in Las Vegas:

The story would have played out alot better if Carl vegence stemmed from blaming the OSI for the death of his father. Instead the events proceeding this episode establishes that Doctor Franklin was coaching and planning this new fembot crisis during his son's visits to prison. This again throws everything from the final scene of Kill Oscar out the window. Although the defeated Doctor Franklin knew he was going to prison, viewers were under the impression that he was going to be changing his ways.

Still over all, this could have been another grand epic adventure if only it was planned and written better and didn't show so much contempt for it's predecessor. As a stand alone episode feature length, Fembots in Las Vegas succeeds on some levels. However, as a sequel, it fails on every level.

I rate this feature length episode:

One and a Half out of Five Smiling Baltars

I just finished reading the early draft of Fembots in Las Vegas part 1. I think there may have been an even earlier draft floating out there somewhere.

The most obvious difference in the script was the surviving fembot from the Kill Oscar trilogy (if you want to call it that) that escapes from the OSI vault is the Lynda Wilson fembot. In fact, neither the fembot Calahan nor the real one is in the script.

Another significant change from the script were the fembots' attack. It was more intense and more brutal in the script. I guess that's what a TV script looks like before the netwok censors butchers them.

Here are the list of changes/alterations from the early draft script that didn't make it screen:

RIP Lynda - I guess you no longer have to go on that diet.

Let this be a warning to all the ladies reading this. Working for Rudy Wells can be hazzardous to your health .... especially when there's a Franklin lurking about.