A faceoff is the removal or opening of a fembot's face. A fembot's facial covering can be referred to as a facemask or faceplate.

The style of removal or opening of a fembot's face, or more technically its facial covering, can vary, as can the look of the subfacial mechanisms underneath. A fembot's face may be a form of access panel that is disconnected and comes of as a block or rotates on a hinge, such as in the movies Westworld and Futureworld, where when removed from the front of the head, the facemask remains connected to the rest of the robot's electronic system by means of a bundle of cables and wires attached to the inside of the facemask. Alternatively, a facial covering may simply be pulled off like a mask, as in The Bionic Woman TV show or the movie Surrogates.

Some facial coverings are shaped to be the entire face, some an "oval" and some peltate ("shield" shaped). The mechanisms visible underneath a fembot's face can vary a great deal. These can range from "bionic" looks closely imitating the operation of the human face, to nothing but nothing but wiring, circuit boards and flashing LEDs being visible.

In non-fetish oriented material such as movies, TV shows or independent videos aimed at a general audience, faceoffs are often use to reveal or reinforce a character as a fembot. With the human face being highly consequent in defining a person, removing a character's face to expose mechanical workings is a dramatic and persuasive way to do so. As such, faceoffs are usualy designed to alienate the audience, either with features that may appear grotesque, like a skull-like grin and lidless eyes, or mechanical replacements for facial features, such as a speaker for a mouth or digital displays in place of eyes. 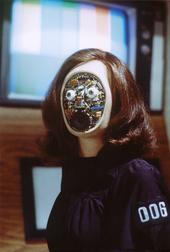 The The Bionic Woman faceoff look, as shown in a production still.

With numerous interacting muscles and bones, the human head is a complex object, of which the face is only a small and hard to delineate part. For example, despite not being part of the facial muscles, the muscles of mastication have an important part in facial expressions. As such, how a fembot's subfacial assembly might look, or even the possibility of a fembot's face being easily delineated and removable, has been criticized in the robot fetishism community, such as in a 2006 forum thread entitled "The Great Faceplate Debate" on Fembot Central.

One example frequently criticized, regardless of aesthetic judgment, is 1970s TV show The Bionic Woman. The show features multiple scenes where the fembots' faces are pulled off like rubber masks. Underneath are one-piece, shallow oval-shaped plates with two eyeballs, a speaker and various electronics components soldered on. Even with the assumption that the removed masks contain the components necessary for simulating facial expressions such as lip or eyelid movement, jaw motion is functionally impossible. Thus, a fembot as presented in The Bionic Woman would realistically look highly inexpressive and inhuman. This is the case for most other faceoff looks presented throughout fembot media, as key features of facial expressions are omitted for a more impactful look.

Most of today's extant fembots' faces are one-part assemblies fastidiously laid over a mechanical framework very similar to the human skull and muscle structure, and are therefore not conductive to faceoffs. However, Abyss Creations' Realbotix models have been shown to possess faceoff qualities, with the facemask being fastened and linked to sub-facial articulations with magnets, thus being easily removable while allowing for a range of facial expressions.

So, however, did Monique. As I ran behind the car, she caught hold of my arm and pulled me down and back. I stumbled forward, outstretching my other arm to push her down. My hand hit her right in the jaw, and she went falling back. I was able to find my balance, and hurriedly I turned to go, but the doors were just then closed shut. I stopped, leaning up against the cold metal doors as I heard and felt the truck's engine start up.
Knowing I missed my chance at escape, I turned back to Monique, who had gotten up and was moving swiftly toward me. She looked as if she wore a mask. As she got closer, details sunk in; flashing lights, microchips and circuitry around those two big eyeballs. Just as she clutched my arm, I realized I was not looking at a mask, but behind Monique's face. This Monique was a robot.

“Can I remove your facemask?”
“Yes Mike.” she said.
He used his arms to push himself up closer to the fembot on the couch, and delicately raised his hands up to her lovely feminine face. Then as he grasped the sides of her cheeks, he pressed inward slightly until he heard a piercing electronic beep.
It worked just like he had seen it on an internet video. Her lovely facemask detached, and he was rewarded by the sight of active and complicated electronic circuitry beneath it.
Her gorgeous blue eyes stayed behind as he brought the facemask down to his lap. They were the only human-like thing remaining visible within that perfect oval opening. There was the hint of a mouth provided by a single electronic speaker at that same spot, and the openings of her chemical sensor system looked a bit like a nose.
But everything else was entirely inhuman. She was 100% computer inside, and the bundles of colored wiring, circuit boards and bright flashing LEDs confirmed that in the most sexually beautiful way he knew.

The nurse’s beeping became more urgent. She straightened her back with a snap and pivoted her head to aim it at Winter. The nurse’s pretty face then automatically opened itself and lifted up, hinged at the top forehead seam.
Instead of the complicated and delicately packed electronics and sensors that Chantelle had, the Nurse now showed off a square LCD display full of quickly changing graphs and data. That was the top half of the oval opening. Below were rows of physical buttons, switches and a few ports.