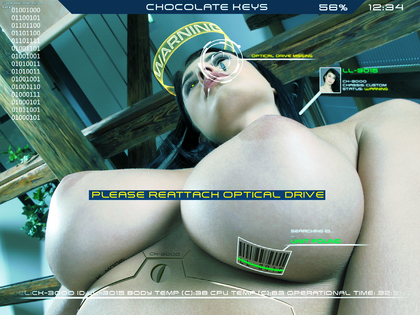 An example of robo-vision. Additional information, such as battery charge, and visual artefacts such as scan lines are laid over first-person vision. By ChocolateKeys.

Robo-vision refers to the portrayal of a fembot's visual perception of her environment.

In fiction, the view from a robot or cyborg's eyes is often portrayed as markedly different from that of human beings. This may include a different range of perception on the electromagnetic spectrum, lower of higher quality of perception, or additional information being superimposed to their point of view.

Visually, the point of view of a robot may be shown by altering colors, applying distortion, or superimposing additional information.