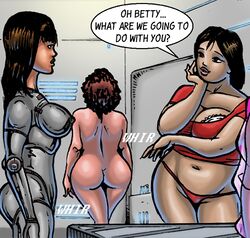 Whirring sounds are a collective term for the distinctly non-human sounds a fembot may produce by moving her body. These sounds are produced by the mechanical operation of a fembot's actuators, whether they be servomotors, hydraulic motors or any kind thereof. These sounds may be part of the fembot's normal operation, due to manufacturing restrictions or aesthetic preference. They may also be unintended, resulting from abnormal operation, such as malfunctions, damage or disassembly. They may be paired with stiff robotic movements to further illustrate the artificiality of a fembot.

"She sits back in a nearby chair, spreading her legs for you. She's got no panties and you can now see her penetrating her simple fuck sleeve, two fingers covered in lube as they whirr, in, buzz, come out with a mechanical tempo."

— Just for You by RoxxyRobofox