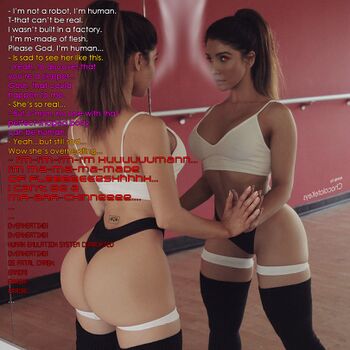 A fembot malfunctions as the reveal of her true nature contradicts her programming as a sleeper. By ChocolateKeys.

A malfunction is an event where a fembot fails to function properly. This can result in a wide variety of unintended and erratic behaviors. These may range from socially inappropriate actions, motor impairment or even cessation of the fembot's operation.

Malfunction can precede, accompany or follow damage. However, malfunctions are different from damage in that while they also fall outside of a fembot's normal operation, they do not result in immediate physical harm.

Malfunctions are caused by something in the fembot functioning incorrectly or being obstructed from functioning at all. As such, malfunctions can emerge from a fembot's hardware, her mechanical and physical components, or her software, the collections of instructions on which a fembot operates.

Due to their wide range of causes and seriousness, malfunctions can be represented by a wide variety of fembot-related trope.

She watched the voluptuous young woman take in her explanation. From Candy's expression it seemed that the shapely machine's processors were once again having some difficulty formulating a reply. Her eyebrows were raised a little, her mouth opened slightly and her eyes unfocused in an altogether dumbfounded expression. Camilla began to suspect that the mere mention of multiplication had been enough to fuse the vacuous robot's brain, when the inanimate brunette spoke softly.