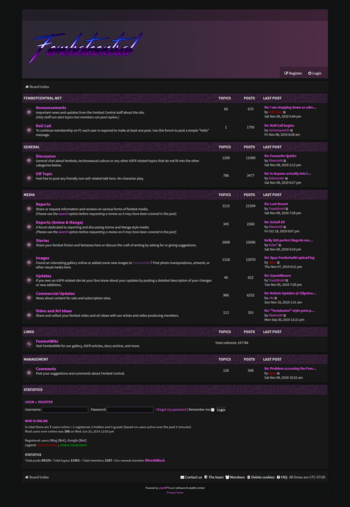 Fembot Central is an internet forum dedicated to fembot fetishism.

Fembot Central was created on May 24, 2002 by KOS-MOS, as an evolution of Gynoid Gallery's Bulletin Board System. Its original web address was http://www.fembotcentral.com/. For a time in the mid 2000s, Fembot Central had a gallery feature that allowed members to upload images and original artwork. This capacity has since been superseded by FembotWiki.

On June 15, 2015, Fembot Central moved to its current web address under the new ownership of Robotman, https://www.fembotcentral.net/, after an extended period of downtime due to the previous owner allowing the domain to expire.

In September 2019, Fembot Central, Robotman stepped down from Fembot Central's administration, after thirteen years of administering and four years of owning the forum. TheShoveller was chosen as the new site owner, with new staff members also joining.

As of May 2021, Fembot Central's staff is composed of: