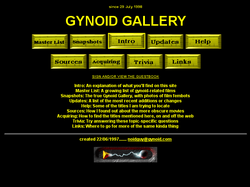 Gynoid Gallery was a website dedicated to fembot fetishism, started by Noidguy on June 22, 1997.

Gynoid Gallery's focus was primarily on female robots portrayed in films and television. The website maintained a master list of works featuring fembots, along with a "snapshots" section featuring video captures taken from VHS and later DVD sources. This Master List may have been the first online attempt to catalogue the appearance of female robot characters.

The site also featured a bulletin board system (BBS), introduced in the late 1990s, making Gynoid Gallery a hub for the ASFR community.

The website co-existed for a time with Fembot Central, introduced in 2002, but closed in the mid-2000s. Its role as repository for fembot content would eventually be picked up in 2008 with Robotman's creation of FembotWiki.