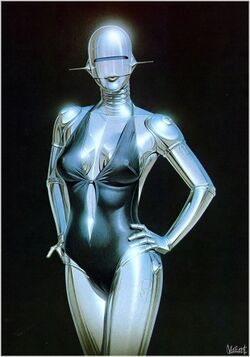 Gynoid is a term used to specifically describe a female humanoid robot. The etymology of the word is from Ancient Greek γυνή (gunē, “woman”) and . This is as opposed to the term "Android", is derrived from the Ancient Greek ἀνδρός (andros), genitive of ἀνήρ (anēr, “man”)

While gynoid has come to specifically refer to female humanoid robots, the word Android has been used for decades to refer to humanoid robots of all gender. It is also worth noting that another specific medical definition of gynoid refers to a pattern of fat distribution: