Photo manipulation involves altering existing images to a specific goal, and is a frequent practice in robot fetishism and fembot fetishism. 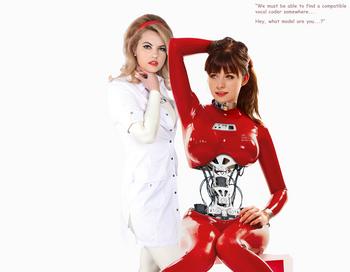 The addition of exposed machinery onto the photography is a typical example of photo manipulation. By BA. 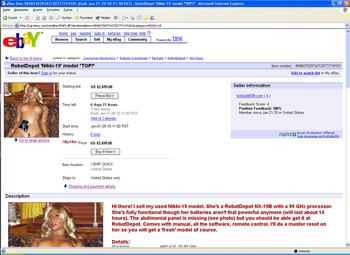 Contextualizing a picture as a fembot for sale may constitute photo manipulation. By Bart.

Photo manipulation can be done through the use of analog tools, such as retouching with ink or paint, or more recently through the use of computer graphics editor software. The spelling "photomanipulation" can also be seen used, along with the more colloquial "manip". "Photoshop" can also be used as a noun and a verb, in reference to Adobe Inc.'s Adobe Photoshop raster graphics editor software.

In the context of robot fetishism and fembot fetishism, photo manipulation refers to the act of altering a picture, photographed, drawn or otherwise, into an expression of the fetish, namely robots with a high degree of resemblance to human beings. This may be done in various ways, for example through the adjunction of elements, such as access panels or faceoff, or by the removal of others, such as erasing limbs to suggest disassembly or damage. The adjunction of text, or the contextualization of a picture as showing a human-looking robot may constitute an instance of photo manipulation.

Although it may exist as commissioned, professional work, photo manipulation as understood through robot fetishism and fembot fetishism is mostly an amateur and unsanctioned practice. Creators often require or request no monetary compensation and use scavenged images without express permission from the models, photographs or artists. Similarly to fan labor, these transformative works may infringe on the original authors' economic and moral rights, and may be litigious.

While commercial software may offer more functionalities and easier accessibility, their gated nature tends to narrow their user base. On the other hand, open-source solutions or solutions supporting third-party additions might be free and have a more dynamic community, but may be more complicated to use.