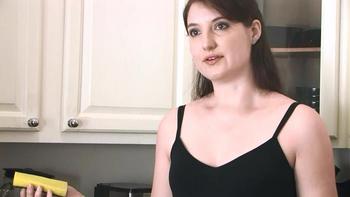 Technically Erroneous is a custom video made in 2012 by Nickel Dakota Productions.

A man comes home and finds his fembot girlfriend frozen in the kitchen with a sponge in her hand, repeating "Error 342". After several failed attempts to snap her out of it, he pauses her and then resets her. At first, she seems alright, but then she suddenly grabs a kitchen knife from a drawer and attempts to stab him with it. After pausing her once again, he shuts her off and drags her off screen.

The camera then shows her limply sitting in a chair. The man connects her to his computer and turns her on. After typing a few things in, she suddenly starts laughing. After several resets and continued laughter, he turns her off and resets her again. This time, she starts speaking in gibberish. After resetting her a third time, she rapidly stands up and sits back down. The fourth time, she freezes in random poses. He once again shuts her off.

The camera activates again to show her laying on a bed while he speaks to customer support on his phone. After activating her several times, each time causing her to violently convulse on the bed, she finally activates normally. After talking with her for a few moments, he has her go and fetch him a glass of wine, but when she comes back, she is once again spouting "Error 342", with a wine glass in one hand, and a hammer in the other. The video ends with a close up of her face.