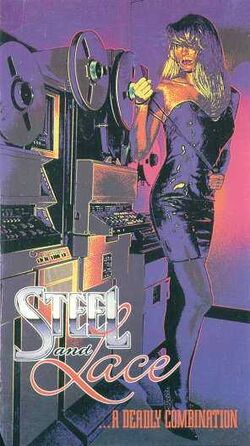 She's tough. She's tender. She's all woman. And all machine.

Gaily Morton, a traumatized concert pianist, commits suicide after a harrowing rape trial. Her attacker is acquitted through the implementation of false evidence presented by his business partners, and Gaily is too broken after the ordeal to live. Albert Morton, Gaily's brother, is a brilliant scientist, and he spends five years attempting to devise a plan for revenge. He eventually creates a robot duplicate of his sister, super-strong and equipped with various weapons of death and dismemberment. She has no memory of her former life, but has been convinced by her brother to become a killer to avenge her death. Her targets are the men connected with the rape trial, as well as the original accused. As the murders begin, a courtroom sketch artist who worked on the trial becomes suspicious, and convinces her ex-boyfriend detective to investigate.

Ms. Wren does a commendable job portraying a robot who has been instilled with intelligence and a directive to kill, but who lacks the experiential knowledge to understand why she should or the moral implications of the act. The effects are far beyond many of the film's contemporaries, using the small budget to create understated but consistently plausible robotic trappings for the actress.

As a minor release eighteen years ago, not many reviews exist for Steel and Lace. However, most of the film's appeal can be summed up by Drive-In favorite Joe Bob Briggs, who had this to say about the film upon its release:

Two breasts. Nine dead bodies. Mixmaster through the chest. Heads roll. Kung Fu. Breast implant Fu. Helicopter Fu. Drive-In Academy Award nominations for Michael Cerveris, as Danny the sleazeball real-estate tycoon, because when he's told his best friend is dead, he says "So is Elvis--what do you want me to do about it?"; Stacy Haiduk, as the amateur-detective ex-girlfriend courtroom artist, for screaming "I won't castrate my art!"; Bruce Davison, as the maniac brother, for saying "She was dead--they were alive--it simply wasn't fair!"; Ernest Farino, the director, an obvious drive-in talent; and Clare Wren, as the killer robot, for saying "There's only ONE safe place."