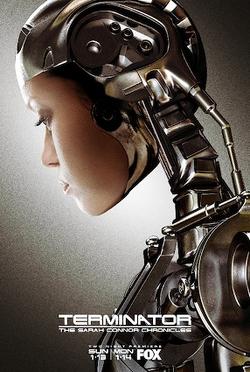 Summer Glau as the terminator "Cameron"

Terminator: The Sarah Connor Chronicles is a science fiction television series on the FOX network that premiered in the US on January 14th, 2008. The show stars Lena Heady as Sarah Connor, Thomas Dekker as John Connor, and Summer Glau as the Terminator Cameron. Together they are working in modern Los Angeles to prevent the creation of the Skynet computer system.

The Sarah Connor Chronicles was the highest-rated new scripted series of the 2008 season, bringing in over eleven million viewers per episode. Following the move to Friday halfway through this season, which followed several other schedule changes and episode pre-emptions, that figure was cut nearly in half. The show has been categorized as "on the bubble," as industry insiders are unsure if it will return for a third season in Fall 2009.

Within the fembot community, response to the program has been mixed. While certain moments and episodes have been praised, particularly the action sequences which served as centerpieces to certain episodes, many opinions have been cool on the show itself. Focus has been shifted too far from one character to another, and the various female robots occasionally gasp for airtime. A fan-favorite character, played by contortionist Bonnie Morgan, did not survive her first episode. Even Summer Glau, a noted sci-fi actress for her role in Firefly and the focus of first-season marketing, has been marginalized. While some disagree on the choice of this compact ex-ballerina as a hyper-strong robot, the community appears to be united in the idea that much more could be done with her character. The air of disappointment around The Sarah Connor Chronicles has been strongly noticeable.