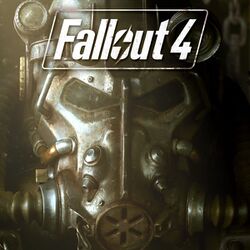 Fallout 4 is a video game in the Fallout series released by Bethesda Softworks in 2015. It has several female robot and female synth characters, and some of its downloadable content and mods expand upon this greatly. The game is available for PC, PS4 and Xbox One. Some of the mods and the console commands mentioned here are only available for the PC version.

The game has many robotic characters, and while some of those are non-humanoid or only vaguely humanoid in shape, the Assaultron robots are not only built in humanoid form, but distinctly female humanoid form with digitized female voices.

In the Fallout universe, machines that are termed "synths" range from Gen 1 synths that are obviously humanoid robots to Gen 3 synths which are biologically indistinguishable from human beings. Much of the game's plot revolves around this point.

Curie in her Miss Nanny robot and synth forms

Like many Bethesda games, the player can have a companion with them as they play the game. The main companion of interest to technosexuals is undoubtedly CVRIE, or Curie for short. When she is first encountered, she is a non-humanoid robot, but her voice is obviously feminine, and she has developed a sense of will and sentience on her own. She can have her "brain" transferred into a synth body later on.

With certain companions, the ability to build a positive relationship leading to eventual romance is an option. Curie is one of these companions, but only after her synth body has been obtained for her.

When playing Fallout 4 on PC, a cheat console is available for the player to use. This opens up many possibilities of gameplay which are not normally present, including the ability to make any NPC a companion. Any NPC can be spawned by using the appropriate console commands, so one can have female synths from The Institute spawned and made companions. These NPC companions do not have the full range of actions available from the game's other companions, and are mostly silent. They can however be traded with and equipped.

The following console commands will spawn synth NPCs. Depending on ones progress in the game, these NPC may or may not be immediately hostile to the player.

With this .bat file installed, open the console, click on the NPC and select it with the mouse pointer, then type "bat followme" and follow the instructions that appear in the console. Any current companions will be dismissed.

The Automatron DLC adds a number of robot-themed quests to the game, as well as new robotic enemies and a robot workshop which allows the construction of custom built robots at any settlement. These robots can be distinctly female humanoid in appearance with digitized female voices, and can even have customizable personalities. They are even available as companions, though they can not be romanced.

Available mainly to players of the PC version, but also in a limited way to players of the PS4 and Xbox One version are game mods. Through the website nexus mods, one can view and install a wide selection of mods for Fallout 4 and other games. Please note that viewing some of the mods mentioned below will require an account.

A somewhat crucial way to stop many game-breaking bugs and severe crash-to-desktop problems.

Enhances the beauty of the default female bodies in the game and allows customizability. Works together with BodySlide and Outfit Studio to allow fine-grain control of every aspect of female body appearance in the game, outfit by outfit and nude.

Allows customization of the female robot character and potential companion Ada, giving her a "human" appearance and effectively making her an android. She also gains the ability to wear clothing and wigs this way, while retaining her digitized female voice and computerized way of talking.

An extremely well-constructed mod that places a synth replica of your late wife (if playing as a man) Nora at Diamond City. She can be picked up as a companion and romanced. She will doubt she is a synth at first, but will eventually come to realize and accept it. This was all made with preexisting sound files from the game as it was released.

This mod creates another synth follower at Diamond City. She also knows she is a synth, and has the pancakes to prove it. If you like pancakes and loud talking, this is the companion for you.

The iCurie mod gives dozens and dozens of new customization features for Curie, all of which are robot, android, or technology-related in some way. Her stats are also greatly improved.

Adds a metallic sci-fi skin-tight bodysuit, craftable at the Chemistry workbench. Can then be modified at the armor workbench and worn by the player or equipped on companions. Compatible with CBBE presets. Compatible with Bodyslide as long as the "Ashara FO4 Cyborg Armour - Bodyslide conversion" mod is installed as well (available on the "Files" page).

Inserts replicas of clothing worn by Major Motoko Kusanagi in Ghost in the Shell into the game. These clothing items are craftable at the armorsmith workbench, and modifiable with the BodySlide application.

Adds craftable latex bodysuits to the game. These bodysuits can then be switched to red, blue, or the default black at an armor workbench. Compatible with CBBE and bodyslide.

Adds a trader selling a large variety of wigs to the game, just outside Red Rocket. These wigs can be traded and equipped to any companion or settler. These wigs can also be worn by Gen 1 and Gen 2 synths that have been made followers.

Adds a crate containing wigs in different styles and colours at the barber in Diamond City.

Inserts a craftable lingerie outfit to the game, which is supported by CBBE and modifiable with BodySlide.

Adds a craftable chrome mask that covers the entire head. Can be crafted at the chemistry workbench.

Inserts several craftable sexy armor and bodysuit options to the game, including a "BodySynth" suit that can make female NPCs or characters look like androids. Supports CBBE with BodySlide files.

Makes most of the robotic synths that wear clothing appear to be female. Customizable by outfit in BodySlide.

Adds the capability to build a complete functional synth manufacturing facility at virtually any of your settlements, as long as you have the space for it. The synths it manufactures will behave just like settlers, and can be traded with and equipped and assigned to work too. THis mod comes with a "Body Scanner" device which functions like a weapon - aim it at a named human NPC you wish to duplicate in synth form and follow the instructions to manufacture as many synth copies of that person as you wish.

Allows various robots including assaultrons and Ms. Nanny robots to be constructed at settlements while in build mode. These robots are friendly to the player and give various benefits to settlements.

Allows more than one robot follower in addition to your current or future in-game follower. For instance, this will allow you to keep Curie as well as your custom android follower you made with the Android Race R Rated mod.

Adds a "custom" radio station to your Pip-Boy that allows you to listen to songs of your choosing. Songs must be in WAV or XWM format to play. Also available is the Static PIPPOD Radio mod which lets you build a "PipPOD Radio" that plays your PipPOD songs at your settlements. Be aware that the latter mod can cause PipPOD to "reset" its playing order if you are listening to it while you approach a user-placed radio that is on.

Robotman has teamed up with Kim Coquette to add over 40 hours of music and audio content to the game through the use of the PipPOD mod.