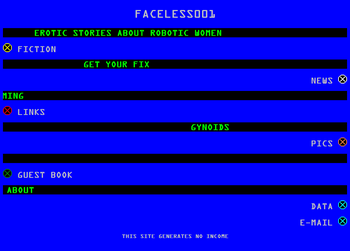 Main page of the Faceless001 website as resurrected on Gratuitous Science: The ramblings and rants of Robotman.

Faceless001 was a fembot fetishism website created in 2000 by Robotman, then known as Faceless001.

The website was initially hosted on a free pornographic hosting service supported by advertisements, but was taken down by Robotman when they grew too distracting. It was reuploaded in 2019 as part of Robotman's blog Gratuitous Science, and is now fully accessible save for outgoing link rot.

In 2008, Robotman would create FembotWiki, a collaborative encyclopedia on fembot fetishism, and would be the owner of Fembot Central from 2015 to 2019.