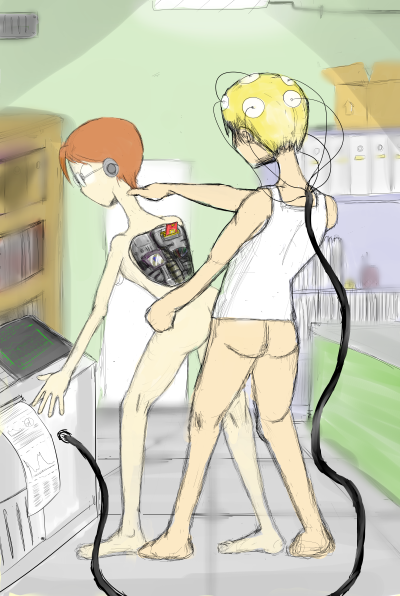 “Okay Tommy, now we're positioned accurately, do you feel the groove in my neck?”

“Yeah, there's a knob below your skin, right?”

“Correct. That's the emergency stop. Press it when you feel you are in danger, okay?”

“I have to admit, I feel in danger since you gave me that smile...”

“Nonsense, you wanted me right when you first saw me. Like the other two hundred guys in the course.”

“I didn't know you are a robot back then.”

“Cyborg! And don't tell me you aren't hot to fuck a girl who also is a machine. That's why I'd chosen to attend an engineering course.”

“I already understood your plan.”

“Really? You don't have your degree yet but understand the research I'm doing?”

“Yeah, you wanna bang a bunch of male virgins and get another degree for it.”

“Don't get cocky. We're analyzing the excitatory response to sexual stimuli. In a controlled environment.”

“Tommy, you aren't the only proband I have. We can quit immediately if you like.”

“Nah, I like to have sex with you. Let's assume you are my girlfriend, okay, Pat?”

“If you like, your imagination is part of the test procedure. But just treat me how you would treat any woman who consented to have intercourse with you.”

He pressed his glans against the rubber lips of the robot –sorry, ‘cyborg’– and went fully in without hesitation.

“Ouch, do you plan to go in dry with your girlfriend, too? She's not going to have a steel vagina, okay?”

“You do want authentic data, don't you?”

Patricia had no punch line for such cheekyness, so she concentrated on the EEG data she got from his brain instead. Sometimes it was really convenient to be a cyborg. She could focus on his patterns while he was shagging her hard and even correlate them with the response she gave him with her hydrolics in real-time.

“Okay, Tommy, you're very aroused right now. Give me some feedback for the video: what do you think of right now?”

“Nothing less descriptive? Some feeling perhaps?”

Thomas tried to gain some concentration.

“The pressure ... rotation [pant] ... it's stroking me, squeezing and tickling my shaft.”

“A feeling, not a sensation.”

The cyborg gave Tom a hard time by simply continuing the fuck while asking him that.

“Pat, could you switch to robo mode?”

“What do you mean, robo mode?”

“What do you mean, last time?”

Thomas pressed the stop button. He knew a discussion would lead nowhere. Well, at least nowhere he wanted to arrive. He bounced his balls a couple of times against Pat's unmoving butt and ejaculated into her metal cunt. Patricia was right, the engineering courses are good hunting ground for a robot woman, regardless what her motives are. What he didn't understood if he really was the first guy who ever hit the ‘panic button’ on her neck. Maybe he was the first guy who had enough programming skills to hack into her prosthesis to make her mind forget about what happened? It was easy, just an extension of the involuntary sleep the knob sent her brain on.

Or he just was the first one who had enough imagination to try to convince her to become a robot. More than she already was. He knew he was near his goal as she played that game a while earlier.

Nonetheless, the current iteration was a step back. He had been too greedy, she would still not accept they've been through this about eighty times already. Enough for now, as much to his regret he wasn't a robot and his tool needed some rest.

Forging the files would take some effort and time, too.

“Oh yeah, seems I have lost my mind for a second, where did we break off?”

“You asked me for my register number, for the undisclosed records. Robert Webb, 2nd semester electronics engineering, register 223-716-234.”

“Robert, I'm pretty sure you understand our intercourse was solely for science. I cannot go out with all the men I work with. Goodbye.”

She closed the door with a stern smile. 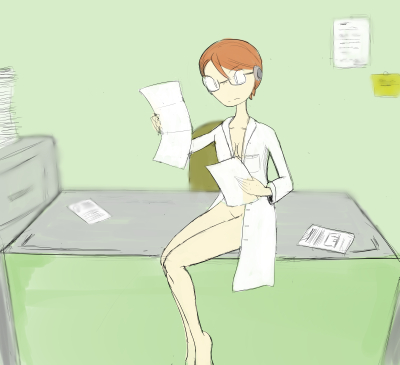 Well, you cannot preselect your guinea pigs, it's not science when don't take it serious right from the start. Thus, Patricia's own doctoral thesis ‘Machine Sex - Understanding a Male Fetish’ would take a while longer given all that redundant data she had gathered.

Back to the Story Archive