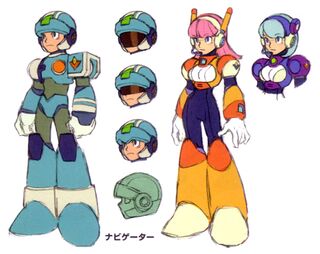 Your average run of the mill Reploid.

Reploids (レプリロイド) are androids from the XXII-XXIII and X??? century from the science fiction video game saga Megaman X, Megaman Zero and Megaman ZX. Unsurprisingly deriving from the word Replica and Android.

Reploids are robots capable of rational thought, feeling emotions, learn and grow exactly like humans do. The Reploid's Artificial Intelligence and mechanics are meant to make them have a human behavior but this a really complicated concept never elaborated on any of the sources reaching contradictory terms on Reploids unifying features as evolving parallel living entities

A theoretical Reploid designed for sex

According to the distinct sagas (Megaman X, Megaman Zero and Megaman ZX), Reploids have the appearance of androids, either male or female wearing different layers of armor, spandex looking body suits and randomly embedded glowing crystals according to the Reploid design; as well as wings, helmets and body encrusted weaponry among others. As a rule, the more advanced the Reploid is the more spandex it will possess. Reploids anthropomorphic in nature are considered Mutos Reploid (ミュートス・レプリロイド) tending to be designed for a specific task of risk and environment.

In game lore Reploids are considered to be the evolution of robots, in the same manner than life; to a point that they are a classification of their own, separating somehow from proper cybernetics. they are insistently considered capable of mutate and evolving during the saga, but the means for this has never been established properly. Yet cellular nanomachinery has been featured multiple times in the games as props; also constituting means of remodeling and regeneration to damaged Reploids to certain extent. Furthermore, Reploids have been revealed, rather inconsistently, to possess a form of DNA that is also supposed to share traits with human soul and as a mean of mutate appearance. If this DNA constitutes a system of information control and heredity as real DNA it would either mean Reploids are capable of means of reproduction allowing evolutive adaptation or at least certain recombination traits.

Reploids can be shut down and run out of energy, as well as being able to show exhaustion. when shut down or out of power Reploids either freeze in place or adopt a sleeping stance. Along the saga certain frailty like has been attributed to Reploids as the possibility of death. what exactly counts as death for a Reploid has been poorly established seemingly constituting a contradictory plot device according to the source (or willingness of repair) as certain Reploids have been seen to receive extreme damage over the serie to the point of total body destruction and being able to be reconstructed and restore to their former selves while others are mourn and considered lost forever. In the Megaman X era rebuilding a "dead" Reploid as well as "cloning" it was deemed as illegal by human governments, yet many Reploids have been seen to be mass produced making what counts as reviving and cloning an unnecessary complex interrogant.

Most advanced Reploid technology featured in Megaman ZX seems to be compatible with humans, giving them robotic features and powers while Reploids obtain human biological traits included a limited life span; yet humans and Reploids don’t seem capable of reproduction, but this has never been properly addressed (although recreative intercourse has been timidly suggested). It has been established Reploids from the Megaman X era possess electronic brains dominated by circuitry having a superior processing power than normal robots. Short circuits on the electronic brain as well as informatic viruses are a cause of erratic behavior and physical mutations. Yet Reploids are capable of achieving evil and mischievous personalities by their own rationale meaning they are either not dominated by programming or that this one is complex enough to self-rewrite.

Interestingly, proper robots featured in the saga are depicted to resemble robotic animals and humanoids with no self-awareness possessing only machine intelligence unlike Reploids.

Robot or Reploid constituting a danger to humanity is considered to have become a Maverick, a vague term used independently of the personal motives or faulty programing on the android. Later on cyborg humans where considered also being able to become Maverick.

This gallery needs more images. You can help by finding them and uploading them to FembotWiki.