I'm Not a Robot 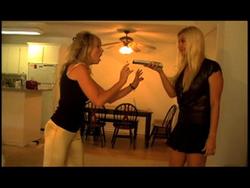 Cinda and Halo with the remote control device

I'm Not a Robot is a custom video made in 2010 by Stuckfast Productions and Guy Talon.

The clip is a story about two roommates. Cinda Hunter works at a local university in their robotics division, and Halo Noir is her new student room mate.

Halo starts using Cinda's computer when she is out of the apartment. While using it, she discovers files and photos that suggest Cinda may be a robot. Halo then finds a remote control device in Cinda's room and decides to try it out on Cinda when she returns.

Sure enough, Cinda turns out to be a robot. She explains that her senior thesis outlined the process of converting a woman into a robot and that she had been the test subject. Halo discovers she is also a robot but it causes her to malfunction. Cinda then tries to repair her.