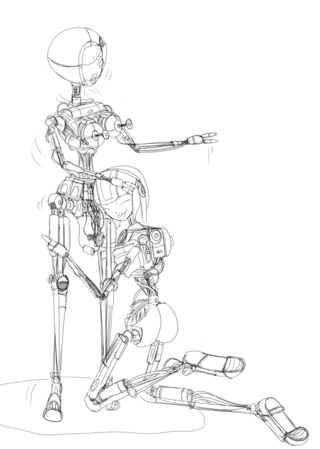 After a near death experience at the hand of two psychotic fans, the Hotbot Courtney gears had an extensive recovery on a private repairing facility for celebrity robots.

On her hiatus, she got to meet the autonomous robot, racing queen Betty “sparks” that after a rather dangerous stunt was left scattered in pieces with most of her neurocircuitry burned out. Now she hangs inertly on a holding unit with few of her stump limbs holding from her own motor wiring coming from her charred torso chassis, with not enough facial apparatus to obtain a gaze of her last operational minutes. In high contrast to Courtney caricaturesque twitching disgust expression.

wrongly accused of a being part of a plot to exterminate organic life across the galaxy Courtney brand managers had no other choice than make Courtney repair session as extensive as those given to lower class automaton with much fewer resources than her until the tension is cooled down to protect her image.

It is not as the broken Courtney had a chance to protest with her main processor tumbled inside. Her jaw is open and her dented faceplate about to come off as her brand managers pretend to explain the situation to the wasted robot.

Both Gears and Betty were repaired front to front; although the first several days the higher cognitive capacities of both robots were not engaged, Both basic active artificial bits of intelligence took interest in scanning their respective work station companions as they had nothing else to do.

Both damaged robots stared at each other for large hours mindlessly after the next technician work-shift, connected to external power supplies. Plates removed, circuits rewired, broken photoreceptors changed and basic inner motors tested in front of each other with no power to reply.

When both disassembled machines’ personalities were brought online Courtney first programmed instinct was to attack Betty that keep staring at her bareness, asking her if she got off on circuits or what.

To her surprise, Betty answered in a calm and flirty manner that she did, and she wouldn’t mean to rewire hers; while blinking her only green luminous photoreceptor lovingly. The humming of her cooling systems suddenly turned louder as Betty only photoreceptor turned coal red as she smiled devilish.

This got Courtney off guard and made her processors spent several seconds trying to produce a coherent verbal response to the point of slightly glitching “ah…ah”.

She was used and fully equipped to be sexually penetrated for nothing more than the convenience of her brand but she had never considered a partner for enjoyment beyond influence gaining as she had done many times in the past.

After a few more insults with no response from the mysterious looking fembot with a thick helmet resembling a layered mane, Courtney was left on a hardly explored territory of actually having to spend time with another robot with no power or monetary gain involved.

Upon a few hours of talk they found out how much they had in common (perhaps except for the desire of exterminating all organic life). Both at the top of their chosen professions despite their artificial nature and other challenges.

Betty came from a hermetic society of robots in the dead planet known as “scrapland” and her technology is especially prone to hacking by more advanced remote control technologies in the galaxy. Scrapland’s robots can easily end up as anyone drones, and Betty has her share of horror stories. Once she left her homeworld she found in racing a way to survive and thrive in a wider galaxy despite the limitations of her tech. Courtney’s on her side was just built for bar singing and managed to become a famous pop music star out of ruthlessness.

Both robots had to see daily how their friend was tested and remote-controlled by now familiar technicians. Upon seeing Betty‘’sparking” over a busted motor circuit and malfunction during a test, Courtney couldn’t help but to feel a strange sensation she normally just emulated, arousal. For the technician dismal this made Courtney also malfunction repeating Betty's name on a loop as her eyes rolled back in pleasure. She had to be shutdown.

When Gears came online she was resting inside a shipping box back at her brand headquarters, greeted by her sponsors and managers. They found her oddly nonchalant asking for the other robot at the facility instead of throwing something at the aide specifically brought for Courtney object throwing tendencies.

She did throw him something out of compromise but quickly asked to be given some minutes by herself (a lot for a robot). Her team response was fear that Courtney had been modified somehow and started to obnoxiously check her parameters and control panels but they were reassured once she furiously kicked them out of her chambers.

She realized how much attached she had become to the other robot and rushed back to the robot spa.

She pretended to be there casually when Betty walked out of the facility. When she approached her to say Hi, Betty placed her arms on her shoulders and gave her a melting kiss that activated all of Courtney’s pressure sensors on her lips.

Since then they have spent their time together when they have a chance to rest from their respective careers, sometimes apart for long periods of time.

Courtney follows Betty's racing finding it of her liking giving that unbeknownst to her it involves blowing other people up. Betty tunes to Courtney’s music, for a few seconds. Despite protests from her managers, Courtney has now a low profile relationship with Betty sharing the same private residence. Bettybecame a balanced second opinion for the sometimes temperamental artificial brunet. And Courtney became a non-brain dead companion for Betty.

When they are finally alone they spend most of their time stripped from their outer platting in an environment appropriate only for robots at very low temperatures, low oxygen and a bit of background radiation for additional privacy (also lots of sentry guns).

They enjoy doing nothing but contemplate each other framework and place their lips together.

Courtney has a clitoris-less vagina that now she has shamefully realized is not there for her pleasure at sharing the orgasmic input Betty's sexless body can experience on her pelvic circuitry.

Betty is normally on control of the relationship as she is able to keep a cold mind about all situations.

She lacks the redundant emotional mimicry Courtney possess, nevertheless she has been shut down one or two times by an emotionally compromised Courtney that feels terrible for it afterward.

When they are alone they strip each other and Courtney's priority is to stimulate Betty'sSexual pleasure simulation sensor on her pelvis and see her experience an orgasm that prioritizes all of Betty’s processing power reducing her speech capacity to basic grunts as her peripherals whirl randomly.

Betty can make her lover experience the same by inserting her concealed interface key on her finger upon Courtney’s brain interface beneath her head shielding. Courtney's interpretation of the input is manifested on loud moaning, screaming, and excessive self-lubrication.

Courtney's excessive personality makes her want to enjoy Betty more, taking her by surprise pulling her pelvic wire from their frame giving Betty a malfunctioning orgasm for several minutes as her arms trash rapidly and her head moves wildly scaning the room aimlessly as she tries to control herself and make Courtney stop rubbing her artificial clitoris.

All of Betty's thoughts disappear as the orgasmic information consumes her. A moaning and in-love Courtney Gears enjoys the sight of her now mindless lover as she hugs herself to her loopy girlfriend.