There was a strong wind on the university roof. It whipped Aki’s long black hair about and blew her skirt up, revealing her transparent white lace panties.

Aki made no effort to conceal her shame. There was no one to see them, but even had she had been surrounded by a gawking crowd she would have done nothing to rectify the situation.

She would let nothing would interfere with her combat performance, least of all modesty.

Aki stood over the form of her best friend. Angela laid perfectly still, her eyes staring blankly. The ceramic blades that had moments before sprung from Aki finger tips were imbedded in her side, severing, or so Aki hoped, her main power conduit.

Aki stood and watched Angela. There were no spasms, suggesting that either the blades were completely blocking her power flow, or like Aki, she had a secondary power source; and was only playing possum.

She doubted the latter. Assassin types were made cheap compared to body guards. They were neither desired nor expected to return. They were one-shot disposable weapons; which conveyed certain tactical advantages, and meant they could be kept ignorant of the ones who sent them.

Aki aimed an axe kick at the spot she thought Angela’s main CPU was housed; but stopped short when this elicited no response.

Satisfied at her friends’ immobility, Aki considered the situation.

She couldn’t move the body from the roof discretely, and the sudden disappearance of Angela would be noticed and attract undesired attention.

Ideally, it would be best if Angela simply got back up and returned to classes.

Emergency repairs and reprogramming were in order.

Time was possibly also a factor. Though Angela might not have a secondary power source, it was likely she had a small emergency one to keeping her cognitive systems going, and assassin types tended to delete themselves when incapacitated; a failsafe to ensure their limited data couldn’t provide a clue to who sent them.

She had either an integrated A.I. like Aki, or a dual A.I. Core/Mask Sleeper system. Aki hoped for the latter.

A dual A.I. would simplify both the reprogramming and lessen the time concerns; the mask personality was non-pertinent data and the core program would likely have queued it as one of the last programs to delete; if it bothered to include it at all.

Even if the core program completely deleted itself, as long as the mask personality remained intact, which was what everyone interacted with, it would be a simple enough to set up a basic control program, and get her back down stairs acting normally with her personality mostly intact… it was non-relevant consideration, but Aki hoped the preservation of her friends’ sense of self would correspond with her pertinent objectives.

An integrated system would complicate matters immensely…and force her to re-evaluate their relationship.

Aki went over to her bag and began tearing out the lining.

She wouldn’t blame Angela for what she’d tried to do; she was a machine after all. She’d simply been performing her function; as Aki had preformed her own.

Aki had been made as a bodyguard for Leonard Winslow for his attendance at university.

Standard security personal were stationed at the house he was staying, and escorted him back and forth from the university, so she was only really necessary for the university itself.

Her physical design was that of Japanese female, approximate age of twenty; B-cups, dark brown eyes, athletic build, with toned ass and thighs. She was made Leonard’s girlfriend, partly to justify her continuous presence around him, and partly so she could be used, as his father put it, as controlled outlet for “sowing his wild oats”; and use her he most decidedly did.

Each night he’d find interesting, and imaginative ways to utilize her body; making her grateful that her flexibility surpassed that of a human gymnast.

He much enjoyed her sexual functions; constantly uploading her with new positions and techniques to try out.

She had no illusions that he regarded her with anything resembling affection. She was a toy; little more than a blow up doll.

Though she would have preferred greater emotional recognition from him; she happy to serve. It was her function.

Aki was with his almost every moment when at the university, and would always join him in his bed at night; during the interim she was often granted the liberty to pursue interests and relationships; establishing and reinforcing the illusion of her humanity.

One of these was the gym.

A human with her toned athletic body would require exercise to maintain it; establishing a regular workout in public prevented suspicion about her artificial nature.

This is where she met Angela.

Was everything just a deception with the hope of using her to get close to Leonard?

She had been close to him many times before, why hadn’t she attempted to dispatch him then?

Had she realized what Aki was, and didn’t think she could succeed with her present? If so then why didn’t she try to neutralize her any of the times they were alone together?

Perhaps she had multiple targets, and couldn’t risk being known and disposed of before she terminated them all.

Then again, perhaps she had been trying to avoid additional student casualties.

This was a prestigious university. Undesired terminations could create complications for the one who sent her; their own offspring might even be present.

She had no illusions about any directed affection being responsible; it would have simply been an underling mission parameter.

Maybe their acquaintanceship was merely coincidental, or perhaps similar programming methods had been used in their personalities, which created a compatibility between them.

She had insufficient data to draw a probable conclusion.

She finished tearing through the layers of lining and padding and pulled out 2 black cases from the hidden section.

Angela had been designed to appear externally totally human; an aspect of her own design Aki occasionally found annoying; the state of her left hand being one of them.

The blades she deployed shredded the epidermal layer of her finger tips which now required repair. As they’d been stored slightly above her wrist, replacing them would involve having her entire hand and forearm re-skinned.

Aki assumed that, like herself, Angela’s primary sexual interface doubled as a data port.

It was a discrete and practical, if a tad perverse outlet. It provided no outward signs of its existence, and obfuscated data transferences by appearing to any who might come to observe as acts of self or mutual gratification.

Tiny receptors were lined just under the vaginal wall; and the sexual lubricant acted as a medium.

She took out a bottle lubricant and liberally applied it to the device in her hand; Angela would be producing none of her own in her state.

Her hand placed upon Angela’s crotch. She spread her fingers, stretching open the vulva, and inserted the VLM up to its base. She turned the knob, which causing the tip to enlarge locking it in place. The two lights went on; the red indicated a lock; the green indicating a link.

Normally Aki would hook up her lap top to act as a buffer, but that would take several minutes. She doubted that, with it deleting itself, it would try a counter hack. With the time constraints she opted for a direct connection. 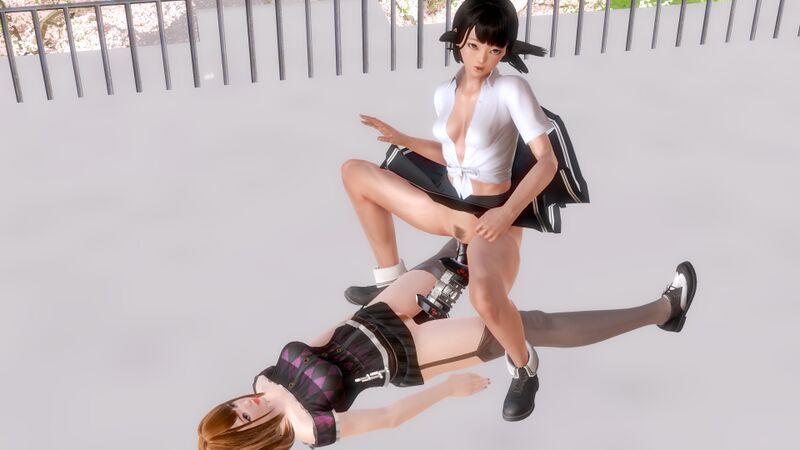 Slipping her panties off she lowered herself upon it, letting out a slight moan as she mounted and locked.

What transpired next was less an epic battle, and more a slow chipping. As predicted Angela attempted no counter attack, leaving Aki to simply focus on bypassing her fire walls. In the end they fell less from her efforts and more from the underling programs having been deleted.

Aki had a feeling of relief as she broke through. Angela was a dual A.I. sleeper, there was almost nothing left of the core program, but Angela’s sleeper personality remained intact.

There were large gaps in her memory were the core program had probably overrode her body, and her history before her activation was little more then a few talking points. Aki felt bad for her friend, her past was a lie…she didn’t even know what she was.

Angela’s mind was flexible, adaptive, and a tad indecisive. A readily accepting vessel for any motives or desires you wished to input into it, as long as they weren’t to far in opposition of current existing data structures.

Aki was pleased by this.

Angela wasn’t person; she was a potentially dangerous machine. She had no life of her own, just a paper thin fabrication. For her to have any future at all, she’d need to be repurposed.

As she was Aki didn’t even need to keep to the sleeper paradigm, it’d take incremental uploads with long down times to allow for proper integration; but Aki was sure she could convert her to an integrated system. She could give her structure and purpose, she’d know what she was and why she existed; she wouldn’t be a lie anymore.

That was long term. Right now Aki had to set up a rudimentary core program to get Angela through the day.

She had to start with the basics, motor and audio visual drivers. A strength limiter to prevent her from hurting someone, awareness suppressant to keep her from thinking about the huge gaps in her mind; a tad rushed and inelegant, it was likely going to make her a bit of a ditz during the interim, and an obedience program to make her suggestible to her.

Aki shut down Angela and disconnected. She unlocked and unplugged the VLM’s from both of them. Opening the other black case, she removed tools and began working on the damage she’d caused.

Despite everything, Aki was almost giddily happy. She had always assumed that once Leonard finished university she’d never see Angela again, but that was different now.

She could hardly wait. Angela would be like her, an eager and obedient possession.

Aki smiled happily, focusing on her work; they were going to be friends forever.