A chance for multiple authors to create short vignettes based on a supplied picture. 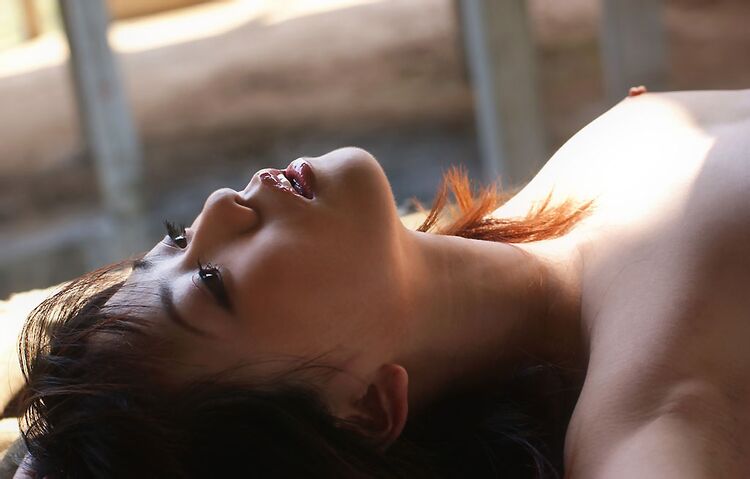 Miki wasn't at work today. She was too busy submerging herself in the passionate embrace of the man of her dreams to be bothered by work. Or so she thought. More accurately, it's what the simulated program being fed into her neural matrix wanted her to think. The simulation was just to keep her brain actively busy, a mere distraction that was necessary so the intruding hacker who busied himself with stripping her naked could snake his way past her security protocols.

A soft breeze through the open window tickled her hair as she lay motionless on the table, her lifeless eyes staring up into the ceiling. Down below, her legs were splayed wide as slowly inserted a thin probe into her privates. They were moist from the activation of her sexual subroutines, no doubt a side effect of the simulation he was pumping into her. This made inserting the probe easier than expected. With the dexterity of a surgeon, he parted her vagina just enough to slip the probe into her, slowly guiding it deeper until he felt the tip of it slide snugly into a connector planted deep inside. A slight twist to the right secured the connection.

Deep in her simulation-fed bliss, Miki was unaware of what was happening to her. Her mind moaned in sexual ecstasy as her lover grunted and pumped his way to mutual orgasm. Outside, the hacker deftly worked his way though her jungle of barriers, encryptions, firewalls, and virus-laden boobytraps, hacking them all apart with machete-like ease. It was rather disappointing, he thought, that such an advanced model would with such dangerous secrets would walk around with the kind of flimsy protection she had.

The virtual penetration was almost complete when an alarm box popped up. It had detected a spike in her neural net activity, which was about the same time that Miki was nearing climax. The hacker knew her fantasy was nearing its end and paused briefly to consider what his options. The pumping by her simulated lover had reached its crescendo. She let out a primal scream of pleasure as waves of ecstasy washed over her before collapsing back on the bed. She had never felt as good as she did before reality crashed in on her.

Her lover faded from sight. The warm satin beedsheets she was wrapped up in faded just as quickly, and she found herself laying across a cold hard table with a stranger between her legs. She tried to jump up but her cooperative body responded with weak twitching. She tried screaming, but her voice synthesizer had been disabled too. It didn't take long for her to detect an intrusion snaking its way through her security protocols, leaving a trail of crashed programs in its wake. Her attempts to fight off this intrusion were an exercise in futility. The worsening situation didn't even give her enough time to find out why she was being hacked in the first place.

He finally punched through her final barrier and instantly she knew what he was after. "My secrets!" she realized, and with the revelation of why she was hacked came the fear that there was nothing she could do to stop him. He was too cunning and skilled, and she was simply outmatched.

With one press of the button, he started the data transfer. Most hackers would simply copy what they obtained from their targets, leaving the original data intact, save for a bit of cyber-graffitti to trademark their crimes. He was different. There would be no tag marks left in her. Everything pulled from Miki would be replaced with white noise data. It took a while for her to realize the horror of what he was doing as her memory was slowly wiped from her. All of her high-level programs and routines began to crash and fade as it was replaced by random 1's and 0's. Soon, her fear of deletion would fade and then Miki herself would fade.

As she lay there helplessly on the table, the last bits of her being wiped out, the hacker moved up, staring deeply into her face. Her eyes, long-gone of any liveliness twitched out of sync. Her partially open lips twitched the same. The malfunctioning robot had aroused him in like few other hacking targets had. He brushed away the stray wisps of hair that had fallen across her lifeless face, and then he leaned closer. As the last bits of Miki faded from her, the last thing she would briefly remember would be an unfamiliar program probing her mind, while an unfamiliar tongue probed her mouth.

Discarded. She had finally been discarded. It was inevitable for her kind. As she laid there with her mouth slightly agape, she was trying her hardest to hold onto every volt left in her body as she slowly shut off. To hold onto existence.

She was one of the many women converted a few years back. The earth had supported too many people for too long, and unless dire actions were taken, the earth would literally cook itself. Unpresidently headed by China, Japan, and Russia, the Miyatso Worldwide Overpopulation and Environmental Protection Accord was signed by every nation on earth. Not like many had a choice, nuclear war was threatened, and many rich countries would not be heavily affected. Overpopulated nations had its women “repossessed”, converting them into cheap labor droids. Those who were poor and not converted were sentenced to a far worse fate. En masse, they were frozen in concentration camps, to be used to replace droids after their “usefulness” was over or to be used for spare parts. These giant refrigerators were to be known as Femsteins, for the drunk look on the frozen women’s’ faces. Each nation had its own repository, and requests could often be made, though the forms for a robotic wife took years to process.

The technology for this enslavement was made possible thanks to a breakthrough in computing and material design, in Tokyo and Hunan, respectively. In Tokyo, Japanese scientists discovered an algorithm that allowed a chip to control motor functions within female bodies. The chip was powered off of a small fuel cell, which used the brain’s electrical impulses to split water, and then obtain power from the re-creation of water. The only problem? The fuel cell needed enzymes every few days in order to keep working and the chip taxed the brain so heavily, most women only lasted 10 years or so. Without the enzymes, the battery would just continue to suck power from the brain, letting the woman slowly become brain-dead before dieing. In Hunan, the material the chip was made from, Saberskyn, had finally been perfected. Previous to this improvement, the material was extremely hard and expensive to make. Now, it was as easily produced as plastic and glass.

Her name? Unknown. It had been deemed Emma from the 42 year old man she had worked for. She was one of 58 plumbers, all robotic, under his care. Many people in Nebraska had gawked, completely slack jawed as they themselves tried to understand the new world they lived in. Women who had not gone under conversion were allowed normal lives, but had their access to any type of war-making or computer equipment device revoked, punishable by instant conversion if caught. Emma fate had not been so lucky. Nebraksa was not kind to her, nor to fembots in general. She had been raped, abused, and overworked. If she had still had her humanity, I would have no doubt she would have gone mad. But as a fembot, she proudly continued fixing leaky pipes, and never thought about what could happen next. Then one day, her owner died. Continuing with her protocol, she continued working until her battery ran out of enzyme. She had been at the park at the time, walking to a house to fix the basement water heater. She just fell over, flat on her chest, and then slowly rolled over to get up. But she couldn’t. She just laid there, feeling the chip release her, and finally being able to feel again. Her body could no longer move, and her mind was slowly coming to a stop, but she felt one thing as she struggled, free. Finally free.

After four solid months of global touring, playing music incomprehensible {but still somewhat compelling} to the grass-hut-dwelling locals we find on this wretched "Fifth-World Poverty" junket, NOW I finally get my allotted "quality time" with our pretty fembo-mascot?

And I have to empty her BEFORE I can use her?

The violent, pent-up screwing that will shortly ensue will NOT involve my Dearest Manami pictured above, sad to say - but it WILL happen!!!!!!!!! Tomorrow night's gig will be INCENDIARY, mark my words.

I don't know where I found her heck it was a few months ago. Perhaps in some perfectly preserved ruins. I was sent on behalf of wealthy oil tycoon as a lone member of a surveying team. Of course at first I thought some assasin but when I got a closer look at this woman I found out that is was an android or in the case of the woman variety a gynoid.

I decided to examine her at length. It seem that who or what was responsible for her demise or shall I say deactivation left no trail. This person was good After surveying the island I returned to the place where I found her. I decided to take with me I put in a base droid program that I found useful and I was able to get her walking under her own power.

"I will follow you." She spoke in a cold and emotionless way. Of course the program I instered into her was simply that to make them more functional until I can place my own programming into her. She was a bit young for my taste but I'm sure I can find a use for her. We got off the island and reported my findings. I kept her while my client got what he wished for. Perhaps I can make look a bit older. In any case she is another blank canvass that I can paint....