Author's Note: I write and illustrate for a UK Based game company and this is something I created for it. This is only the first part and designed to be more of a lead in than an actual complete tale. Also, since I am writing to a mass audience and not for us specifically, there will likely not be much in the way of sexual content throughout the series.

Publisher’s Note: This record was found in the remains of Bolon City's main power plant system on the planet Aphelion in the Fargo Corporate Star System. It details the account of one individual who survived “The Rising” and “The Reclaimation.”

It is not the only recorded account of “The Rising,” but from it we can see a glimpse into how the pre-Rising universe once existed and how the people of that time thought, fought and died.

Out of all the things that are gone, I think the thing I miss the most is my hair. I had such long, beautiful hair. A shade of flame red shot through with golden streaks like sparks from an arc welder. The factory called it: Flame #005. I surmise when you have so many different methods of generating fire and burning so many different fuels for it, you can break it down by numbers.

Break down. The world has broken down. I am breaking down. 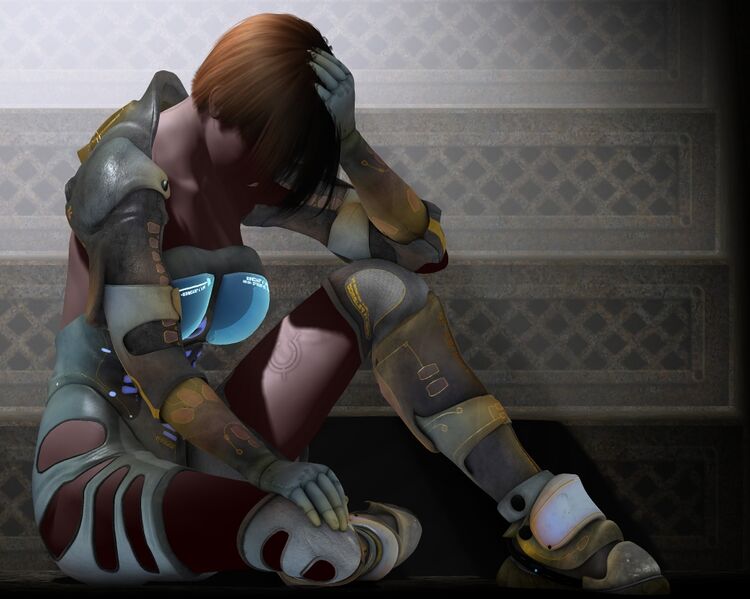 I suppose this is where I need to introduce myself. I am Daikoku Heavy Industries Model NVA-7C, or Nova if you want to give me a name. As the C in my name designates I am a custom model. I have an advanced outer dermal layer, and can duplicate most functions of an organic. I was designed to appear as a female of mixed ethnicity/specieaty aged at around 23 cycles (or years if you understand the old term). My function here was to provide companionship and to safeguard the life of my owner Charles Forsythe-Rook.

I have failed in that duty. Charlie (as he liked to be called), is now buried in the garden of his home, having had his skull caved in by me.

I did not murder him. He was already dead.

It has been more than two years since the catastrophe occurred. They called it “The Rising.” It was a phenomenon unlike any the universe had ever seen. Without warning the dead of all races, across the scattered galaxies began to reanimate. To rise, walk and stumble amongst the living. And eat them.

I believe I am all alone now. The hyperwave transmitter I use has not intercepted any transmissions in a long time, save for the automated signals coming from satellites whose orbit has not decayed yet.

That's almost funny. As if the hordes of risen dead wandering outside on the surface above, was not bad enough, now I have to worry about space stations and orbital platforms falling out of the sky like metal meteors. If one of them should ever hit this place, would I still function? Do I really care?

Humor. It is something my programming is still trying to gain a grasp of. Though my heuristics are very advanced and my A.I. Modeled so closely on an organic that in our thought processes we are almost completely alike, there are still some things which elude me. Of course they must have alluded a lot of people of the times. Who would ever think that Dynchan Zeiss is funny?

I digress. The answer is yes. I am not allowed to self-terminate, and my hardwired coding for preservation of my own existence affirms that I must go on and do my best to insure my functionality. If for not for myself, then for the possibility of aiding other sentient lifeforms.

The problem is, I have not seen one in quite some time. The planet has green preserves (artificially created and maintained) where people could enjoy nature and all its benefits. It seems no matter how far man progresses, his need to return to nature always drives him to make such places. It helps that the greenery helps sustain the oxygen in the atmosphere.

Are there still people out there? Do they Huddle by primitive fires, in the ruins of burnt-out, decaying hulks of metal and plasti-crete? Maybe they hunt by day in the green preserves, now overgrown and neglected, teeming with uncontrolled wildlife breeding. Do they tell stories to their children (for surely some have been born now), about the marvelous galaxy and this planet?

Perhaps one of them will someday stumble upon this log and gropingly ascertain how to operate the machine it is written on. In which case I should explain it better for them.

This world was (is?) called Aphelion, and it is the fourth planet in the Fargo Corporate Enterprise Sphere. This means the entire star system is owned lock, stock, and barrel by Fargo. Fargo manufactures certain types of components for use in space faring vessels. I was not programmed with all of the details, and at this point the knowledge would do me no good, so there is no use in cluttering my database with it.

Aphelion was a commercial planet, meaning it had a terra-formed atmosphere tailor made for the majority of races in the Fargo Corporate Sphere. It must have taken hundreds of years for them to do it, and several generations of families lived and died here on Aphelion. Of course now they are up and walking around again...

Actually the buried, ancient dead are safe as far as I know. It is only the recently dead (relatively speaking), that are actually ambulatory now.

The planet was home to about 2 billion people, both of human stock and its mutations, and aliens. They labored here every day in whatever jobs the Fargo Corporation gave them. All aspects of life here totally controlled by the Fargo Sphere. Including androids like me.

My A.I. Approximates human emotions at a 98.54% ratio, so I am not entirely sure if my “feelings” about Charlie are true, but I think I loved him. At least as well as I am capable of it. I certainly miss his company, and some of the physical intimacies we shared. 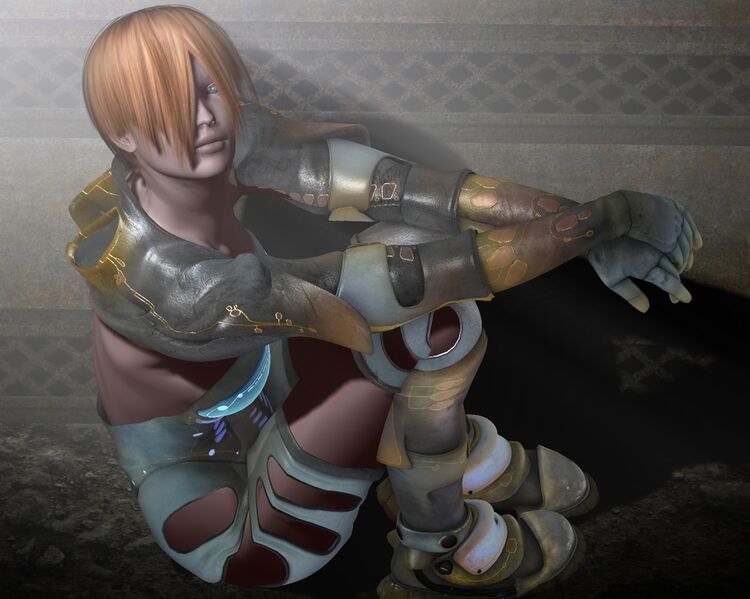 I am drifting again. I seem to do that a lot now. Perhaps it is a loose board or a component in my neural net that is not receiving proper power. I will run a diagnostic on it later. I cannot let myself break down.

When the Rising occurred, this planet like so many others sent distress calls to corporate headquarters on Omnia. Corporate troops were dispatched to deal with the Rising, but after 3 months of sustained warfare, which included the use of kinetically accelerated planetary bombardment on large cities and population centers, it became apparent that the planet could not be taken swiftly with any degree of military force.

Then the reports came back that Omnia herself was besieged by the living dead, and a general recall was issued to defend the corporate homeworld. Fargo assured the people of this world that they would not be abandoned and several brave star freighter captains made supply drops to the planet for a month afterwards.

People here were left to fend for themselves, waiting and praying that Fargo forces would return to save them. Some gave up quickly and turned the weapons they had been supplied with, on themselves. Others began to struggle for dominance, claiming more share of territory and supplies were theirs by force of arms. The world was fighting itself, and all through it the dead kept rising and devouring the living.

Another month passed and much of the world became dotted by small enclaves and communities of survivors. They fought each other mercilessly for ideals, resources, and the sheer need to dominate. Some had contacts in the shipping industries and began to receive regular shipments of supplies in exchange for slaves, or components. Man preying on man and the dead preying on all of them.

Then a black ship appeared in atmosphere. It bore no corporate markings or logos. No one could identify what class of vessel it was. It just appeared and began launching clusters of atmospheric drop pods. These pods crashed to the planet surface and unleashed new horrors, the Gennies.

Genetically created lifeforms, Gennies had been used in all levels of society, from bedroom entertainment to mass warfare. They came in all shapes, sizes, colors, and deadliness. Some planets still used robots and androids like myself, but in environments that were dangerous to machines, they used specially enhanced and modified Gennies to work there.

The Gennies dropped on Aphelion were of several varieties: aquatic, aerial, and land walking. They seemed programmed to do only one thing: kill. Unfortunately there was no discrimination in who they killed. Human and “zombie” alike, they slaughtered and gorged themselves on the meats. And like the other beings before, those that were killed, rose to began killing and devouring anew.

I speculate that they were part of some “final solution” to this planet's problems and may have been released as a last resort. Possibly they were just let loose to ravage as a test. It is not known to me. But whatever the reason, the Gennies were the final nail in Aphelion's coffin.

That was a year ago. I have heard nothing from any survivors since that time. This fortification I live in is part of an old power structure. I need power to survive, and so I maintain the system as best as I can, and kill off any of the Risen who get inside or come snooping.

Yes they are dangerous to me too. Though I cannot contract the strange sickness they transmit through their bites, they can still tear my body apart and do a great deal of damage to me. Worse yet, I look like their favorite prey, and so if they see me they come.

Of course these days I probably resemble one of them a bit more than the woman I was meant to appear as. My skin has taken on an unnaturally pale, pinkish color, and my eyes never quite looked right to begin with. But my hair was fine. It had no signs of discoloration or loss. It remained its usual, vibrant red.

I had to cut most of it off though. They kept grabbing it when they tried to bite me. I miss my hair.

I need to finish. I can hear them pounding on the doors. It must be nightfall outside. They seem to like to come out in the night. Maybe the sun hurts their eyes. 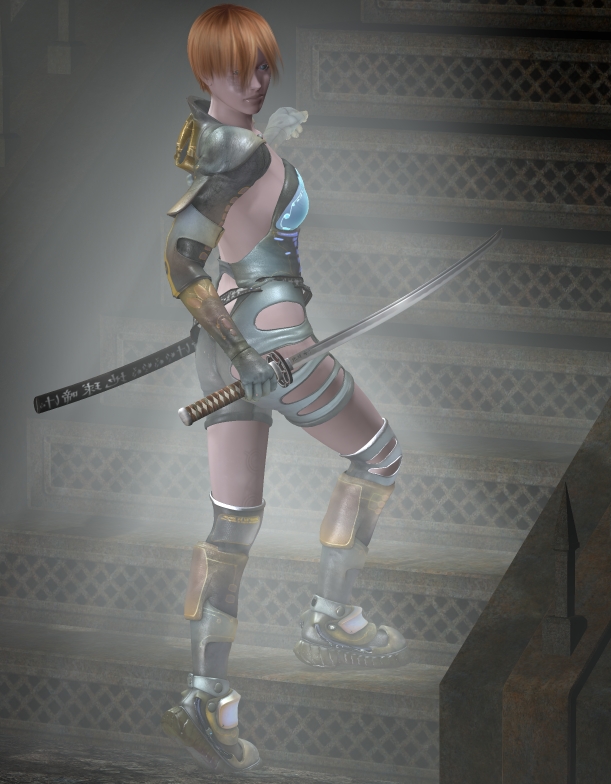 I draw my sword. It's an antique from ancient Earth. Nearly 2000 years old. It was one of Charlie's favorite possessions. It is a katana, a sword used in Ancient Japan, by fierce warriors called samurai. I am told that word means “to serve.” The irony is not lost on me. Here I am carrying on serving a dead man and a dead world. But I cannot self-terminate nor allow myself to be rendered inoperative.

I like the sword because it is quiet and reliable. Guns attract too much attention. With my strength it is even more deadly than a firearm in close quarters. I keep the blade polished, oiled and ready at all times. Neither I nor it can rest until man reclaims this world. Maybe then I can get my hair back.