The Dyson Institute stories take place in the present day or perhaps the not-too-distant future. The world is largely similar to our own, but with one significant exception: The Dyson Institute has made it possible for thousands of women to voluntarily become highly-sophisticated female androids, for their own benefit.

Known to the general public only as a highly-exclusive, up-market day spa and health club, the Institute operates internationally with one goal: giving women the opportunity to become androids. The spa aspect not only provides a cover for the Institute's more covert primary operation, but serves as a valuable recruiting tool. The Institute's facilities provide not only conversion services, but extensive servicing and maintenance facilities for its clientele. The Institute's facilities are almost exclusively operated by female androids--some of them scratch-built units with advanced artificial intelligence, but predominantly former organic women. 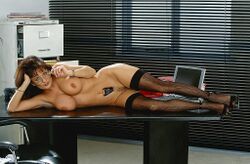 The Institute is the brainchild of Dr. Elaine Dyson. Dr. Dyson, a tall, beautiful woman in her forties, is herself an android, having been the first to undergo the conversion process she had pioneered. Dr. Dyson had previously worked as an engineer in the nuclear power industry, designing systems to safely manipulate fuel rods within nuclear reactors. Almost overcome by the stresses of a particularly difficult project, she was suddenly struck by the idea of developing a replacement android body for women, realizing the incredible possibilities inherent in overcoming strictly human limitations. Having developed the earliest designs for such an android, she recruited a small core team of fellow female scientists, engineers, and physicians and began what would eventually grow into the modern Dyson Institute. Once Dr. Dyson had proven the viability of her concept by being the first woman to become an android, she and her team worked to refine the process and the basic android design. That core team of women soon followed Dr. Dyson in becoming androids themselves.

Dr. Dyson enjoys the highest levels of servicing and maintenance, and has a dedicated team of female android technicians who see to her technical support needs. She has been through several android bodies at this point, often being one of the first units to be upgraded following the development of a new android chassis.

The Dyson Institute's androids are marvels of robotics design and engineering. They are, externally, completely indistinguishable from organic women. Their outer dermal layers are molecularly sealed, leaving no detectable seams between components or around access panels. They are capable of doing virtually anything an organic woman can do--only better. They can ingest food and liquids. Even the closest of intimate contact will not reveal their robotic nature.

The Institute's androids are of modular construction for ease of manufacture and maintenance. The torso is the core of the android, containing the sophisticated computing hardware that stores the client's digitized consciousness; only one torso is built for each android, while other components--heads, limbs, pelvises--are manufactured in greater number and stored for future use.

The Institute prides itself on the conversion process, which is painless and in no way harmful to the woman's original organic body. Sophisticated neurointerface systems are able to analyze, digitize, and record a woman's thoughts, memories, and feelings--in essence, her entire consciousness. That digitized consciousness is uploaded into the core systems of the android torso, where it is 'run' as software and interacts seamlessly with a considerable array of subsystem software that attends to the moment-to-moment operation of the android's body.

The organic bodies of clients are maintained in a kind of suspended animation, kept in perfect health while inert. Units have the option of returning to their organic bodies at the end of their contracted period of operation, or at any time they so choose. It is comparatively rare that a woman elects to return permanently to her organic body, as the Institute strives to make their robotic existences as satisfying as possible; some women will from time to time return to their organic bodies in order to have children, however, generally returning to a new android body afterwards.

From early in the development process, Dr. Dyson placed considerable emphasis on designing a fully-functional, high-performance robotic sexual system. The key hardware element is the SynGina package, which is designed to not only mimic but to exceed the capabilities of organic female genitalia. The sexual sensitivity of the SynGina in particular is far greater than that of an organic woman, allowing a unit to experience a vastly expanded range of sexual pleasure. The SynGina is also engineered to provide the ultimate sexual experience for a unit's partner.

Although all units are provided with multiple access panels for ease of maintenance, the paplexus interface is the primary 'gateway' into an android's systems. Located on the lower abdomen, between navel and pubic mound, the paplexus is an access point allowing power, data, and fluids replenishment connections. The paplexus is extensively utilized not only under in-lab maintenance situations, but also for day-to-day self-maintenance and those occasions where one unit needs to interface directly with another.

The Android Servicing Unit, commonly abbreviated as ASU, largely resembles a desktop computer tower (though perhaps slightly larger). It is an android woman's primary point of contact for routine self-maintenance, such as recharging, diagnostics, and fluids replenishment. The ASU is networked remotely with the Institute's computer systems, allowing routine data backups, download of software updates, and upload of diagnostic information.

The Dyson Institute continually works to refine and improve its technologies, culminating in a long series of new android models. Units typically are given the chance to upgrade to a new chassis after a series enters full production.

Rachel, Maria Dwyer, and Christina Logan were RX3000 series units. Although advanced for its time, the RX3000 chassis was not without its share of technical difficulties.

The UX1000 series, following a highly successful run, has largely been supplanted by the UX2000 series as the present state of the art. Virtually all UX1000 series units have been upgraded to the UX2000.

The UX2000 series is the most advanced unit currently in general service. Dr. Dyson is presently Unit UX2K-3050.