From FembotWiki
Jump to navigationJump to search 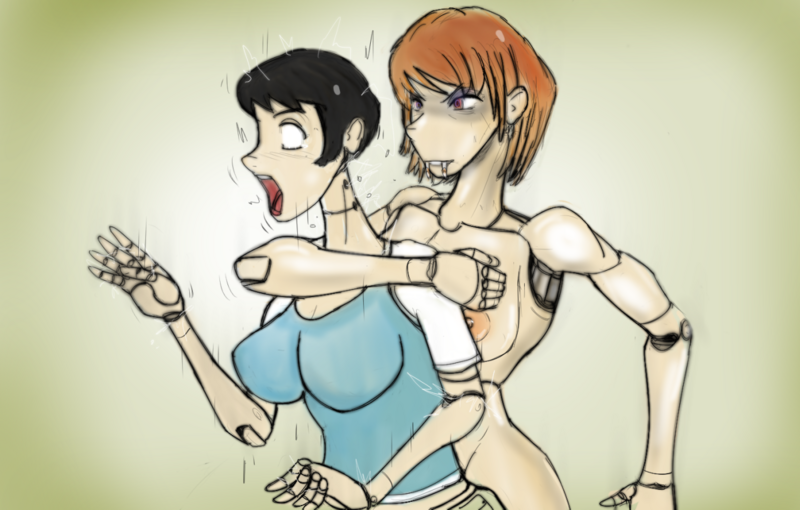 Based on user Boo short story for Halloween 2017

There was a certain low fog that hovered along the ground in Portland when the fall time took hold. It only existed in the urban areas, as there was far too much foot traffic stirring up the moisture in the city at all hours of the night. It lent the tightly packed houses of the Portland suburban area a certain spooky element. It wasn’t enough to frighten anyone, but it made the atmosphere just a hint uneasy for the Halloween season.

The fog also made a figure crouched low to the ground more difficult for people to see. Though there was no one on the streets at nearly midnight, but if there had been, the naked figure of a woman crouching outside a window would have been practically invisible. Between the shadows of a nearby over grown hedge, the fog and the poor lighting nothing could see her. She scanned left and right, looking one last time for anyone who might see her. As her eyes flicked back and forth the faint red glow of the small LED’s behind the shown with a demonic appearance. She lifted a hand to her head, then into the side of it thought a roughly circular panel on her temple and manually clicked off the lights in here eyes. After that she simply reached up and silently pried open the window she had been crouched under and slipped inside.

The woman had been watching this residence silently for a week now, she knew that a home maintenance android was here, and that the family had left town earlier today. Now was the perfect time to strike. She Slipped through the window and landed on her towns before slowly guiding her whole body down into a crouch and then began to move.

She scanned the room she was in before moving up the hall way to another room. This one was the daughter of the family, also a robot, but not home at the moment. She darted across the hall to what looked like a laundry room, and there in the corner was her target. A series F home maintenance unit. Currently plugged in and charging. A power cable discretely running up her light blue t-shirt from where it was plugged in near the floor. A small raised part of her shirt, right above her chest made it clear where the plug went in.

The naked woman opened her mouth and two long, sharp, and copper coated fangs jutted out of her upper canines. She sprung forward and tilted her head perfectly to allow her fangs to sink into the skin on the robot’s neck. A fast but potent electrical pulse washed over the maintenance droids body. The bot’s eyes flashed open the moment the fangs hit her but her eyes rolled up in her head as the electrical pulse shorted out most of the systems in her body. A whisp of smoke already escaping the artificial tear duct as the robot collapsed into the naked woman’s arms.

She guided her gently to the ground, letting her teeth retract from the neck of the home droid. She wasted no time in disconnecting the power cable from the wall and then slipped both hands into the collar of the T-shirt. With powerful robotic strength, she split the shirt in half and revealed a bra free chest, a small panel open above the breasts with the power cable sticking out. The vampire pulled the cable free and tossed it aside before digging her claw like fingernails into the skin on the robot’s chest and spreading it apart. It was more resilient in some of the area’s where the synthetic flesh was thicker but eventually it all gave way and flopped to either side of the poor robot’s torso.

Below the flesh had been a comically thin piece of clear plastic lending some small rib like shaping to the skin and containing the mass of cables, wires, and circuitry. The vampiric woman gripped the plastic and tugged it out of her torso, cracking it and shattering it into small pieces. Some tumbled into the robot’s open body and others simply scattered about the room. Without a moment of hesitation, the vampire began pushing aside components inside the woman until she found what she needed. A slight blue glow emanated from a status light on the power cell. The vampire let her tongue slide over her lips as she spied it. She wasted no time in attempting to extract it. Mostly because her current power supply was critically low. She unceremoniously tugged the unit out of the inert robot’s body. It took a few tugs, each of which caused the damaged robot’s body to jerk and flail, the fleshy flaps waving up and down. Finally, the cables snapped and in a shower of sparks that illuminated the entire dark room, the power cell came free.

She set the power supply on the nearby ironing board and reached her hands up to her own chest. She pushed in firmly and there was a small click, then her entire chest and belly cover came free in her hands. She set it on the ground, leaning against the dryer. Her own internal workings were night and day different from the little maintenance robot’s. One was bundled together, neatly packed into place, and specifically designed to be efficient in both repair and operation. The vampire’s open torso was monstrous. Messy, and cobbled together. Parts from dozens of robots were stuck in there, held in place by tape and zip-ties. Many places great globs of solder were all that held her together. There were two power cells stuffed in among the tangled mess of circuitry in her torso, one pulsing a faint red, the other was completely dark.

She reached into her torso, roughly where her belly might be, and grabbed the darkened power supply. She pulled it out enough that she could use her free hand to yank free the cables that were twisted together with the original wiring on the unit. She dumped the dead cell into the ruined opening in the other robot’s body. She then quickly set about twisting the wires inside her body to the new power supply. Once she had done that she settled the power supply back into her body. It was bigger than her last one so she spent a moment rearranging some of the wiring inside of her to make it fit. She clicked her torso plate back onto the front of her torso and let out a sigh as she felt the electrical power of the cell permeate her body. She took one last look around the laundry room and saw a small closet with two different outfits in it. She took one, a plain teal t-shirt, a pair of jeans and sneakers. This would help her find her next target. Her systems estimated that the new power supply should last at least 3 to 4 days, even as it bled power out of the connections she had made. She dressed quickly. The shirt was snug, and all it accomplished was show off her breasts.

The vampiric machine stalked out of the laundry room, up the hall, and out the window back into the Portland suburban neighborhoods. When the family returned there would be an investigation but it wouldn’t matter, the Vampire would be long gone, moving to another nearby city as she had done a dozen times before.

Click on a date/time to view the file as it appeared at that time.

You cannot overwrite this file.

The following page uses this file:

This file contains additional information, probably added from the digital camera or scanner used to create or digitize it.

If the file has been modified from its original state, some details may not fully reflect the modified file.