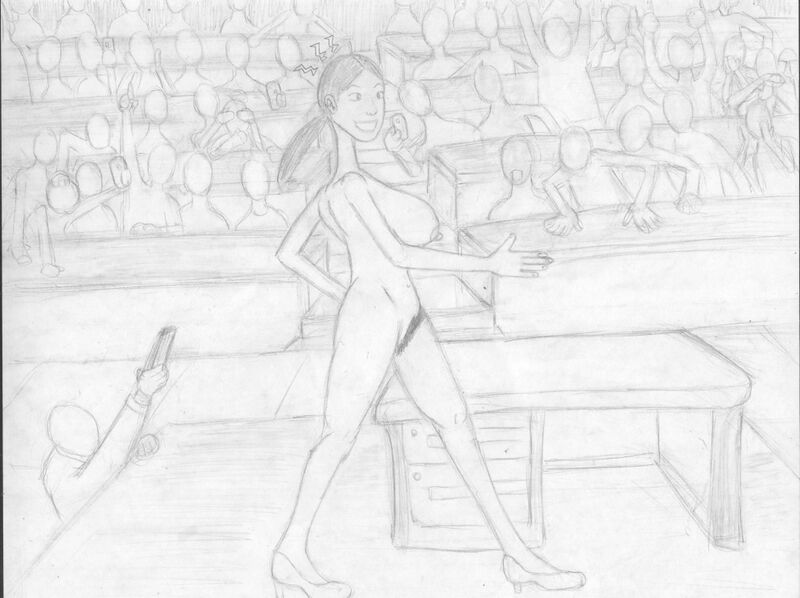 Despite being kind and dependable, Ms. Chen is only an automaton programed for teaching with the brain the thick of a business card. There is nothing her logical circuit can do to question her directives when they come from the PTA, even if they forget to revise her careful tuned settings after allowing them to heavily edit her brain in the last session so she could submit better to parent demands. Now she is ready for her next lecture, walking the corridor, from her recharging stand to the classroom, downstairs to the podium wearing the specific clothing specified in her new settings that only cover footwear. Ms. Chen want to explain herself to her silent class, but she is unable as her primary task is run the lecture. After some minutes of exposure in which her students have been able to both look at her front and rear they start to loosen up, taking photos with their cellphones, throwing papers so she pick them up and they can take a better look at her breast or her bottom depending the direction of the projectile she has to fetch, and in general calling her attention to see her close. As the disorder and shouting rises a built in signal device inside her chest activates allowing other teachers to know the robot need support. Upon arrival the principal hurries to deactivate Ms.Chen in such a haste that it causes damage to her circuits that she registers as pain before the scene fades from her photoreceptors. Now Ms. Chen will spend a long time with people touching her wires and looking at her body. Reprograming her has if it was her fault. Parents will complain, other teachers will complain, all in front of her deactivated bareness, pointing at her as if she was a whore, as her hollow self can do nothing but smile in fixed position, the same questions will be asked again and again, the students will never forget her naked body and the people she cares for will now see her only as a glorified computer.

Click on a date/time to view the file as it appeared at that time.

You cannot overwrite this file.

The following page uses this file: